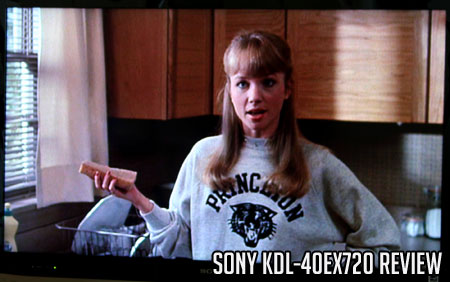 Black levels are strong, even with 480i source material.

The Sony KDL-40EX720 produces lots of interesting questions regarding value. Certainly the $999 price tag is reasonable for a 40 inch, 3D Compatible TV with 240Hz rate, a good Internet Suite, and exceptional good looks. The 3D glasses are not included. The 3D Starter kit from Sony which includes 2 sets of active shutter glasses, an unneeded 3D transmitter, and the 3D Blu Ray of Alice in Wonderland costs around $399. And dont forget the 3D Blu Ray player which will run you another $179. Even if you choose to forgo 3D for the time being, this TV future proofs you for it. I like that option at this price. The picture quality leaves something to be desired in both HD and Standard definition. That said, this is not Sony's premium TV with the highest end processing and picture quality performance. Sound performance also disappointed. Competition is from Samsung's UN40D6400 and UN40D6500 as well as upcoming LG and Sharp models yet to arrive.

See Calibration and Testing Results and our Picture Settings