Color rendition is realistic and this TV processes the picture well through composite video input – at least as far as color and black levels go. Viewing angle, and loss of detail in dark scenes (esp. with a background light soure) are recurrent issues with standard definition programming. It really depends upon the program. Lighter brighter movies look good in standard definition, while we struggled to see detail in darker ones.

As a prominent feature of this TV we feel compelled to rate this category on its own. We viewing 3D content Blu Ray 3D of Alice in Wonderland with Sony's TDG-BR100 3D Glasses. Initially there was lots of flicker from the glasses, but we later determined this was just while they were warming up. There was some occasional blurring especially near the extreme bottom corners, but overall we felt the 3D experience very good. We did not experience any of the flashing in the sides of the glasses that we disdained in some of last year's 3D TVs. Instead, the picture was very pleasurable and the movie pops and really comes to life. The presentation was overall very smooth. I would go back for more. It exceeded my expectations.

Though impossible to accurately picture the 3D image, we enjoyed the 3D performance of Alice in Wonderland.

Black Level/Contrast/Contrast Ratio: Black levels were stout and measured .027 to .029 on the IRE scale giving the TV a high post calibration contrast ratio of 1585:1. Beware though that a suction cup test is not the same as viewing the TV from afar. Though blacks are truly inky, the screen filter interferes with perceived black.

Dark Shadow Detail: Though shadow detail is good with much programming, it's poor when there is an ambient light source and the scene on the TV is dark.

Color Rendition/Color Accuracy: Color seems weak in today's TV world. Colors were too subdued for our taste and we would like to see more saturation and light throughput.

Viewing Angle/Off Axis Viewing: Always an important testing point with LED and LCD TVs, viewing angle contrast is a problem also for the EX720. At 15 to 20 degrees the contrast and black levels degrade significantly and colors become washed out. They continue to diminish slightly to extreme off angles.

Degradation in contrast is not severe but is apparent. This shot the Blu Ray version of The Departed highlights the slight degradation of contrast at angles of 30 degrees or more.

LED Back Light: With a static gray screen displayed there was obvious horizontal light banding from the edge lit LED back lights. The irregularities in back lighting revealed themselves from time to time when viewing content as well.

Motion Lag: There was some jerkiness and judder effect in scenes panning side to side even with the 240Hz rate Motionflow feature on standard setting. There is more without it. During fast motion scenes we also noted motion lag.

Features: Extra features on the EX720 include 3D compatibility, 240Hz refresh rate, full Internet suite options. There is a full Internet browser and search functionality – an unusual feature in this price category. 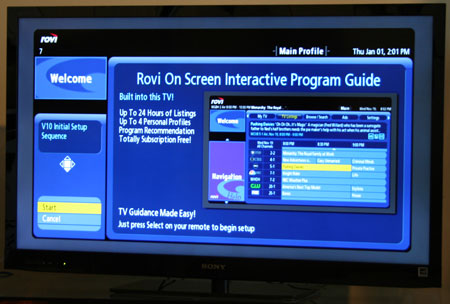 There is an included Rovi On Screen TV Guide, useful for those that do not have cable or satellite TV guides through those services. 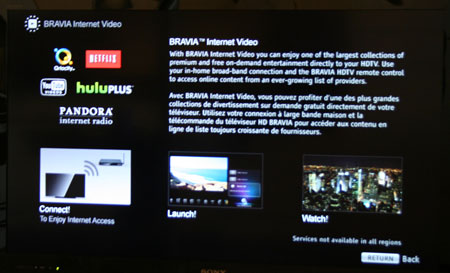 Inputs: The EX720 has an ample input selection. 4 HDMI inputs (1 on the side). Ethernet Wired or wireless Internet connection. One set component inputs, one set composite, 2 USB connections. 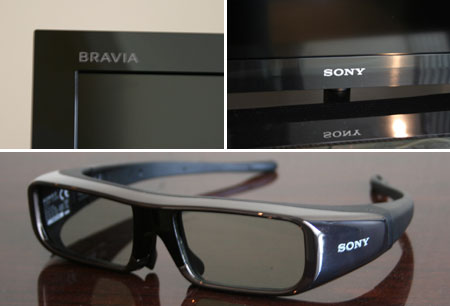 The EX720 is extremely attractive. The 3D glasses are large, comfortable and work well.

Remote Control/Menu Funtionality: Though the remote control is not backlit, I like the matte finish rather than the high gloss finishes that leave many remotes marked with finger prints. There are a couple of new buttons on this years remote including Netflix and Qriocity keys for direct quick access to those Internet TV options – a nice touch. The Options button takes you to Picture, Sound and other controls and is important as scrolling through the Xross Media Bar menu system is cumbersome. The EX720 retains the hot sync sensor from last year, displaying whatever signal is streaming content. The manual is included in the menu system for convenience. Picture and sound settings are discrete for each input.