HD picture quality is superb for the most part. The previous issues with AutoMotionPlus are non-existent with HD content. In fact the replacement feature LEDMotionPlus didnt seem to have any impact on motion lag or judder with HD signals. When we turned the feature on the picture got a little darker (presumably from a decreased backlight output) but that was it. We did not note any difference in the performance of the TV - even in motion scenes. So we recommend leaving the feature off.

In last years C6500 we noticed inconsistency across gray scales especially in blue tones. Those mistakes are corrected in the D6000. Color rendition in the D6000 is accurate, realistic and vibrant - all three traits we look for in color quality. In scenes from the Blu Ray version of Troy we noted greens and blues as spot on with the odd turquoise and gold uniform colors of the Spartans. Blacks appear inky and saturated from front and center. Dark Shadow detail is also above average. Color uniformity looked good to us except at side angles. 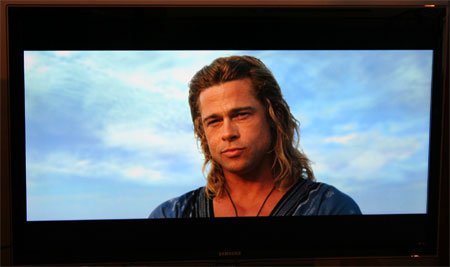 A shot from the Blu Ray of Troy, realistic flesh tone in the foreground and depth and color accuracy in the background - just what we like to see.

Viewing angle is however a drawback and area of concern. We noticed some degradation of black depth and contrast at 20 degrees off center though not extreme. The contrast degradation gets a little worse to around 35 degrees then remains about the same to the extreme side views. The screen overlay is glossy and does yield some glare though we prefer the better blacks that clear screens produce rather than anti-glare screens.

A quick calculation in Contrast Ratio measured a very respectable 1514:1 post calibration and with checkerboard pattern. Clear screens such as this one usually yield better blacks and contrast than TVs with more anti glare technology inbuilt. Samsung dubs this UltraClear Panel.

Notice the difference at a 30 degree side angle in the second shot from the Blu Ray Blood Diamond. There is obvious light creep at the left edge and loss of contrast and black level.

The D6000 gave us mixed results with non-HD signals. There is significant lack of natural background blur no matter if the LEDMotionPlus feature is turned on or off. Fortunately this issue is eased somewhat in the movie mode setting. Essentially the 120Hz judder reduction feature is not adjustable in the D6000. The ensuing picture from the D6000 has a soap opera effect without the depth created by natural background blur. The inbuilt judder reduction technology for which there is no control included in the TV, obviously goes into hyper drive when processing and upconverting lower signals such as 480i or 480p. It almost made me dizzy watching a couple movies. That out of the way, color was very good, as was clarity, vibrancy, and light output. Dark scenes with 480 content got over saturated at times, losing dark matter detail.

A standard def shot from Netflix, Meet the Fockers.

We'll also include the Ethernet connection for the Smart Hub Internet TV options in the Non-HD category since most of the programming we viewed even in HD was so compressed that it's obviously not true HD. We viewed several programs from Netflix with varying results. Interestingly, the user can change the picture and sound modes but not individual settings for picture, sound or anything else. Picture modes include movie, standard, and dynamic as always but you'll have to take them as they come with the Ethernet connection. Picture quality was generally very soft through this connection. We noted plenty of grain and motion artifacts in Non-HD material and also a lot of judder in HD streamed content. Colors are much more subdued. Viewing angle considerations with off center contrast degradation remain.

First features that the UN46D6000 LED backlit LCD TV does not have. It is not 3D Ready, is 120Hz rather than 240Hz which is not a big deal in our estimation, it does not have AnyNet+ which allows communication with other Samsung devices. It also does not have the searchable Samsung Smart Hub feature. But it has overall a very compelling feature for value package.

Inputs: Amazingly with this thin screen Samsung has managed to fit 4 HDMI slots, a PC slot, a LAN (Ethernet) input (for Internet connection), 3 USB ports, and a component video input. The component and composite video inputs are compressed by way of one input through adapter breakout cables which come with the TV.

Necessary breakout cables for component or composite video. For those of you with expensive component cable, the quality of these breakouts might not be acceptable.

Appearance: The 46D6000 comes with a 15 to 20 degree swivel rectangular table stand. The stand is heavy with a clear glass neck, glass top and black under base. The super thin 1.2" depth is impressive. There is a very slight scarlet red Touch of Color around the edges of the TV. The 1" framing bezel is black gloss with a thin clear acrylic edge all the way around the frame. Overall, it's an extremely updated and attractive design with an input cavity in the back that allows for tight cable wiring.

Remote Control/Menu Funtionality: Samsung has revamped the overlay menu system in favor of a more opaque blue laddered system. The options are similar, but this menu is a little easier to use than last years - though not as impressive looking. When it comes to menu systems we prefer practical, so good job Samsung. The D6000 series does not include options for Dejudder control nor for turning off the 120Hz rate feature (previously called AutoMotionPlus) 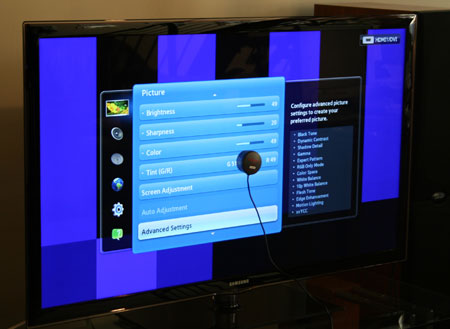 The backlit black push button remote control is simple, basic and straightforward without the flash of the higher end Samsung models. The standard remote control contains a discrete button called P. Size for changing the video aspect ratio between Screen Fit, 4:3, Smartview 1 & 2, 16:9, and Wide Fit. Use the Screen Fit sizing when possible to get the least processing interference.

Audio Output: Volume levels from the 46D6000 were sufficient from its 10W X 10W built in speakers. But the sound quality is hollow, and somewhat tinny. We highly recommend going into the Sound menu and selecting the SRS TruSurround feature which gave a nice improvement to sound quality. We also recommend changing the Sound Mode from Standard to Clear Voice to allow for better voice quality. This feature, while seemingly reducing volume output will eliminate some of the echo effect and tighten overall sound performance quality.

Internet Connectivity: Google Maps is a particularly fun and pleasing addition to the Internet Apps included in the D6000 called Smart TV or Smart Hub. The You Tube application defaults to full screen and HD if the video is HD which a very nice improvement. Hulu Plus, VUDU, ESPN, and of course Netflix and Amazon on Demand are present. Samsung's Smart TV Apps could be the most comprehensive we see this year among TV manufacturers. It has Apps for sale such as Pac Man and Workout videos that cost .99. News and other services include USA Today, AP, Home Shopping Network, and Accuweather. The Your Video feature is a portal for movie and video rental. It yielded lots of new release movies which are mainly availably through Vudu for $3.99 each.