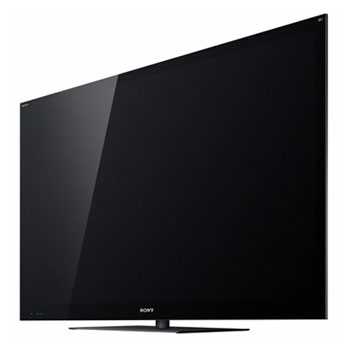 Just two years ago Sony introduced a fantastic local dimming LED TV that had one of the best pictures we had seen on an LED backlit LCD TV. The model was the excellent (rated 95 in picture quality) KDL-XBR8 series and was 5" in depth with a large framing bezel. The new XBR-65HX929 not only has true full array local dimming backlighting, it is only 1" in depth and a thin beautiful framing bezel. The TV has a fantastic picture quality with non-3D sources with incredibly deep black levels and eye-popping definition. Colors are rich but not oversaturated. But even with all the extra features, during some test viewing with 3D Net content we still noted some blur from fast moving images (in 3D). This is not the case of course with normal 2D viewing. The fast motion processing and judder reduction controls are speedy enough to deal with almost any 2D programming deficiencies.

3D viewing on the Sony HX929 is very clear, colorful and clean when showing still images. The HX929 delivers true 1080p HD resolution to each eye during 3D presentation. However, fast motion is still a problem even on this highest end Sony TV. Fast motion or bright lights flashing across the screen make for unwelcome distraction. With all incoming sources, Cimema, Sports, and Gaming results were similar. Though the picture is excellent, we believe this is one reason Sony displayed the SI Swimsuit models in the sports category rather than true fast motion sports. But, not to be confused with other 3D TVs, the Sony is certainly no worse and is better than most.

Unlike many of Sony's competitors 240HZ rate features, we actually like Sony's. While not as strong in terms of effectiveness, it doesnt introduce lots of nasty artificial effects. Sony the MotionFlow XR 960 (manipulated 240Hz) builds on previous efforts to neutralize judder caused by camera movement as LCD and LED TVs struggle to process these movements fast enough.

The new monolithic design from last year is present on the new HX929 series. The local dimming LED LCD TV is only 1" in depth with a thin framing bezel. See the TV in action here. 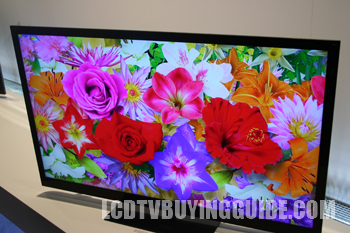 Sony was the first out with a true Internet TV this past fall of 2010 with the GT1 series, enabled with Googles Chrome browser. The HX929 does not have the Google TV application, but it does Sony's new Bravia Internet Video and Qriocity functionality which has among other premium Internet TV Apps HuluPlus, Pandora, Amazon VonD, You Tube, Slacker Internet Radio, Crackly, Hmm why am I not seeing Netflix here? Must be a typo in the specs from Sony. Does anyone dare not carry Netflix?

The XBR-65HX929 has Everything Sony has to offer this year in top features. Motionflow XR 960; a manipulated 240Hz rate which simulates 960Hz due to use of the true full array local dimming LED backlighting.

The HX929 is not inexpensive. As the highest end Sony LED LCD 3D TV for 2011 this TV will hurt your wallet. But if you want the best features available in a Sony TV, this is the TV for you.