Sharp is one of the only manufacturers in the market to have the full array local dimming technology available in the LED backlit LCD TVs. It's an expensive technology to produce and helps tremendously with LED picture quality on the 70LE945U by:

2) It greatly improves side angle viewing quality. Other improvements we can see in the 70LE945U are the better black levels, and especially detail and definition around images on the screen. Contrast is certainly better from the full array LED lighting. 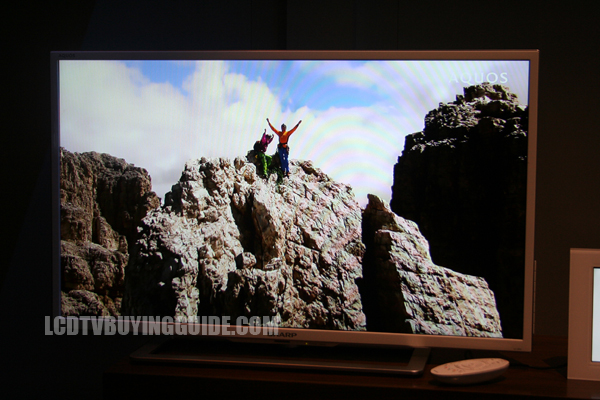 The X-Gen panel modification to Sharp's 70LE945U LCD Panel provides a wider acceptance of light into the panel and "traps" it to help with the brightness of images on-screen. This LCD front overlay panel design also contains fewer ribs (the black separation between the colored sub pixels and pixels). This helps to maximize black levels and improve color rendition due to a fuller pixel structure.

The LC-70LE945U includes Sharp's 4 color Quattron technology and adds the yellow sub pixel to the red, blue, and green ones to make up the entire cell structure. This adds better yellow and gold rendition to the Sharp picture. It's an innovative extra that other manufacturers do not contain.

The AquoMotion 240Hz (not to be confused with Samsung's AutoMotion) does not describe a submarine in action but rather a smoothing process by which the 240Hz helps reduce judder in fast moving images and panning side to side camera pans. Judder is a jerky motion that can distract viewing.

Due to the full array LED backlighting (as opposed to edge lit backlighting) the screen depth of the LE945U is 2.5" which is still plenty slim enough - just not the ridiculous .5" we see in some HDTVs today. The brushed matte finish dark silver frame is also a little wider to help accommodate at 1.1". It is a very expensive and updated design despite these dimensions.

This Sharp LC-70LE945U comes with built in Wifi which allows you to connect to Sharp's Smart TV feature which features all the usual suspects in streaming Internet TV options.

Sharp's Smart Central TV gives you up to 3 unique profiles to allow you to access your own personal profile preferences. It's a separation tool to help you navigate the Smart TV Internet options and save your individual settings.

With Sharp's new Smart Central feature you save up to three distinct profiles that let each user customize their dashboard and navigation in the 945's Smart TV online suite.

Though they do not have as many apps for Internet offerings as some of their competitions, Sharp's Smart TV Internet offerings include your standard popular choices like Vudu HD Movies, Netlix, Facebook, and Twitter to name a few. The most important options are covered in the LC-70LE945U.