We were able to view this model alongside the X850B and X950B from last year. The improvements are obvious. Superb up-scaling and conversion of standard definition, HD, DVD, and BluRay incoming content is the objective of Sony with these TVs and rightfully so. Rather than focus on making TVs that will only look great with 4K UHD content, Sony's up-conversion technology is creating a 4K-like picture with normal everyday resolution signals. This is a great strategy and Sony is able to show off their superior processing. 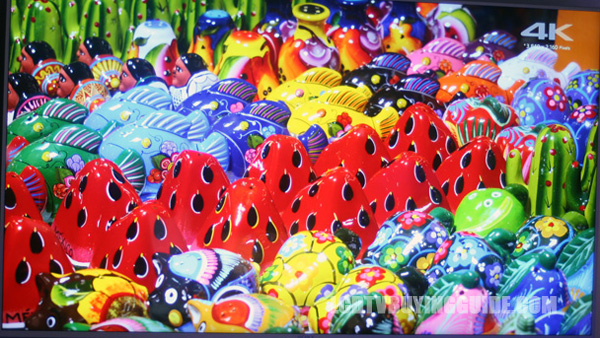 Excellent color, contrast, and light flow through are seen in this shot

The X900C has it all in terms of picture features, Extended Dynamic Range, X1 Processor, and X-Reality Pro up-scaling algorithm, and widened color gamut Triluminous Display technology. All this combines for a fantastic picture. If you want the same picture quality but more upgraded sound from the TV for wall mounting opt for the X930C which has the side-mounted speakers.

How does the Sony X900C compare with an LG 4K OLED TV? We love OLED technology, so for a 4K UHD signal we give the edge to the LG OLED. But we believe Sony has the best processing and outer panel of the 4K TVs, so for 1080p and lower signals we believe this TV outperforms the LG 4K OLED.

Color and clarity take the center stage in this still. Picture depth can also be seen here

This wide-gamut color technology has been fantastic for Sony for a couple years. It produces much more realism and true-to-life color renditions than most of Sony's competitors, and in general takes less calibration effort to obtain a proper picture solution. The X-tended Dynamic Range contrast enhancement technology works well with the Triluminous display to provide incredible light flow through colors and enhance areas of the on-screen picture which are lit by windows or lighting. This all adds up to a more 3-dimensional picture quality even with HD signals. This is what we want. The colors are not over saturated as they are with some, but they still have plenty of pop and are beautiful. The outer panel on the X900C is what really sets it apart from the lower 4K Sony's. It's also what adds so much to the cost. It creates the depth, richness, and vibrant colors and contrast that make this TV so desirable.

Up-Conversion of HD to 4K

Up-scaling and conversion is the most important aspect of any 4K UHD TV for 2015/2016 due to the dearth of 4K content, and Sony is the best at it in my view. The reasons are the excellent combination of the 4K X-Reality™ PRO up-scaling Algorithm technology used with the new 4K Processor X1 engine. On the X900C panel a good HD signal just looks incredible. The predecessor X950B was our highest rated TV picture quality last year and the 900C just improves upon that excellent performance. The picture is noticeably cleaner and clearer with up-scaled and converted HD programming and that's what really matters. Otherwise, why buy a 4K TV? There's not enough content to justify it. The new picture is astoundingly good with bright clean vibrant colors and crisp image edges without being over-enhanced.

The old Achilles heal of LED backlit TVs cannot be fully remedied, even with an outer panel this absorbent. There is still contrast and color loss at side angles, but much less than 95% of LED lit TVs out there.

2D to 3D Conversion – A Feature Worth Trying Finally

As with most processing conversions Sony engages in, this one is also very good. Which is good, because this is a feature we have long called not worth using on most TVs. It's content dependent of course, but try it with a BluRay and I think you will be surprised how good it is. The feature is accessed easily though a dedicated button on the non-touch pad remote control. It does create a more engaging image with more depth, especially for HD sports programming.

Sony does not seem smitten by the curved screen craze from Samsung. I agree with them. What's the point? Sony's design elements are simple and straightforward but very attractive. The X900C has a very thin black ribbon inside the outer panel so there is no indention for the frame (frame-less design. It only 4.9mm at the thinnest parts of the screen and from side angles it looks credit card slim from the sides (almost). There is an extra inch in the bottom center back to allow for speakers and components. The design is the “floating design” to describe how the stand is supposed to be less visible.

The new jet black matte finish touch pad remote from Sony has a very nice fast responsive touch pad that definitely speeds up scrolling somewhat across Smart TV Apps (over 100) and also speeds up search considerably when typing on the on-screen keypad.

But for this year if you're searching on the Smart TV platform we've never seen a better voice search system than the Android TV search function enabled on the Sony 4K TVs. The voice recognition search works flawlessly, even in a noisy room. The TVs response time on delivering results is fast and accurate. Give it a try. It's great for searching YouTube, and Google Play options.

Sony has given up the Apps and Smart TV function to Google's Android TV for 2015. I think this is a smart move as Sony was never really the best at Smart TV. The voice search on Sony's Android TV works incredibly fast and well. It's great for searching YouTube and Google Apps and Games. The menu is full of Google Play options. You log in to your Google ID to access Apps, games, and content from Google Play. Among the various choices:

Google Cast allows you to show movies, pictures, and TV shows from your IOS or Android based smartphone or from a laptop. We suspect the best use of Google Play will be games.

Lastly, if you're not content with the choices, you can always connect a Roku box, which really has the best offerings anyway. Then you get both.

The selection of apps on Android TV is impressive. Most of the services have good content to offer

Sony is one of the primary producers of 4K UHD content with their Sony Studios as well as being the first maker of 4K UHD cameras. Sony claims their new 4K UHD lineup will enable access to over 1,300 4K movie titles, TV shows, and other video through their partnerships with Netlix, Video Unlimited, Ultraflix, and Amazon Instant. We'll see.