The LC-60LE935U LED TV represents the flag ship top of the line for Sharp's 2011 line up. Though we believe Energy Star ratings are overated for TVs in general, this TV has received all of its prerequisites for the new Energy Star 5.1 specifications for on-power measured. 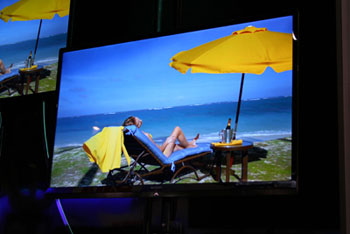 I was very impressed with the Sharp LED 3D TVs at CES 2011 on the LE935. The three Sharp Quad pixel technology 3D TVs (the LE935 being one of them) won our Editors Choice Award for Best 3D LED TV at the show. The LC-60LE935U has full array back lit local dimming (number of zones not published). The TV displayed the animated Blu Ray 3D edition of Despicable Me and we were obviously impressed by the picture. There was hardly any flicker. This was one of the best 3D TV images we saw on a non-Plasma 3D TV. Colors were vibrant and I didnt notice any blur in the bottom right or left edges of the picture. The test was a true one with active shutter glasses on the face (not a stationary stand). The hurdle the Sharp 3D TVs could not conquer was the overwelming distraction when a bright light flashes across a dark background. Bright lights in the foreground on 3D TVs are not becoming to the technology. The second flaw is with 3D viewing is fast motion – which blurs the image.

I have not been a big believer of the 4th color (Yellow) Quattron, Quad pixel technology in the past, but I am becoming one now after many more reviews of the product. The 4th color element contained within each pixel gives Sharp almost a Trillion colors to manipulate. There are 21 million more dots in the subpixels than a 3 color subpixel 1920 X 1080 (1080p) panel, thus the pictures color can be more detailed. Sharp's Quattron picture is impressing more and more with its vibrant colors (especially yellow and gold tones) and extremely vibrant color detail.

The 60LE935 is an attractive TV with a metallic matte finish on the top and bottom of the framing bezel and black gloss on the sides. The frame on top and sides is only .7" yielding a beautiful effect. The depth of the TV is just 2" which is a little more depth than the super thin LE835 series to allow for the LED true backlighting. 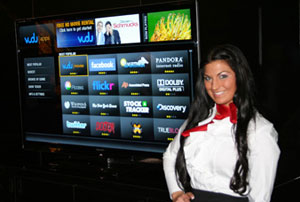 The LC-60LE935U includes built in Wifi for access to Sharp's Internet TV suite which includes Pandora, Twitter, Flickr, Vudu, Netflix, Cinema Now as well as Sharp AQUOS Advantage Live which is an remote online live service offered by Sharp to help you personalize your settings for Internet the way you want them. Sharp is the only manufacturer with such a service.

Full Array Local Dimming from true back lit LED backlighting. This is top of the line technology for LED TVs and will necessarily cause the price to be reflective of the advanced technology. The true LED backlighting allows for more detailed placement of local dimming, thus manipulating this backlight can create a better 3D picture and reduce the flicker present from edge lighting. The 60LE935 has the best 3D picture and the best picture quality overall among the Sharp LED TVs.

240Hz. The 240Hz feature in the Sharp LED TVs is not as over-hyped in eliminating natural background blur as are some of the other competitors. This is a positive thing, as it leaves the picture looking more natural while eliminating much of the judder and jerky effects that are a problem on LED TVs.