The incunbent clear coat screen technology that the UN40EH6000 contains is one of our favorites for 2012. We enjoy the depth perception it creates and black levels and contrast while allowing whites to really peak out. Brightness and peak whites are also exceptional traits.

Color performance on the UN40EH6000 is strong but can be washed out if the backlight is set too high. Keep the backlight dialed back in calibration if you prefer more realistic colors so fans of either look can be satisfied by the EH6000. Blacks are very saturated and flesh tones look natural. One of the areas you really improve in by purchasing the higher end models is color rendition.

For an edge lit LED television the side angle viewing performance on the UN40EH6000 is not bad, contrast begins to fade around 30 degrees which is a good result for an edge lit LED television, but is helped in 2012 by the wide color enhancer technology that is built in to the EH6000 series. There is just far less contrast and black level loss than there was in last years D6000 series which this model replaces.

Black performance on the EH6000 is a strong point, blacks are dark and inky and show improvement over 2011 models, but again it's important to keep the backlight at the right setting. The largest improvement is in detail in dark scenes, an area where the black could be over powering in previous models. 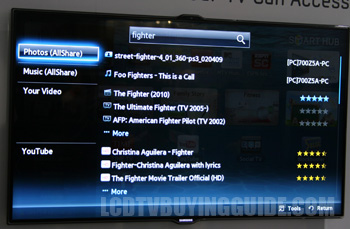 The 40EH6000 has a very thin black bezel of .75" in width. Though this is not one of the more refined or flashy designs on the market it's a good looking set for the price point. The screen depth is still very thin at just under 2.3".