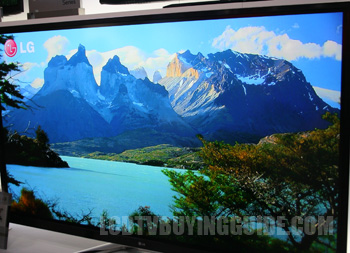 The LM5800 series is similar to the LM6200 series above it. It is available in fewer sizes and it does not include the Magic Wand remote control or Smart TV online functionality. It is LED edge lit and includes LG's passive Cinema 3D. This is the lowest line of LG's LED back lit LCD televisions that does have 3D compatibility.

Passive 3D shows both images on the screen at the same time so the effective resolution being shown to each eye is halved when compared to active 3D television which alternate images on the full screen to each eye. Passive 3D benefits from far less expensive and light weight glasses and for some viewers it causes less eyestrain than active 3D. LG's Cinema 3D performed well enough in our testing but the difference in resolution and overall picture quality was noticeable when compared to active 3D.

The 47LM5800 uses LG's 120Hz TruMotion, after much testing, we recommend locating this feature in the settings, tuning to the User setting and changing the Judder Reduction component completely off to 0, and Motion Blur at level 9 with the exception of sports programming or fast action in broadcast programming for which the feature actually adds quality. This tradeoff will produce lots of jerky judder but it's worth it.

LG's LED televisions have had good off angle viewing performance in the past and the 2012 models are no exception. Compared to many LED edge lit models the LM5800 still looks good at angles around 35 degrees off center where the other will start to have the contrast degrade at 20-25 degrees.