The Vizio P702ui-B3 is a value oriented 70 inch 4K LED TV that we were eagerly awaiting nearly the whole of 2014. The price for 4K technology sure is coming down quickly in 2015. Pricing for this new Vizio offering looked to be a gamechanger for this year, however performance isnt as robust as we initially thought it would be. The P-series Vizio 4K LED TV is produced in 5 popular sizes. The TV is packed with all sorts of picture quality features like full array local dimming with 72 zones, Ultra HD upscaling, and a 960 Clear Action Rate for fast motion processing. Top it off with updated Smart TV features and you have a worthy 4K contender.

Vizio P702ui-B3 is an exceptional value with the picture quality it delivers. The 72 LED dimming Zones are a big plus as well

The most notable positive picture quality features of the P-series 4K LED are the full array LED backlighting (as opposed to edge lit LED backlighting) with 64 active zones of local dimming. These have a direct effect on contrast, peak whites, and deep blacks and we were pleased with the results. Blacks are inky and contrast is impressive. The 72 employed zones are double that of the M-series HD LED by Vizio.

As usual with all LED backlit LCD TVs, the P-series Vizio is no exception that contrast and coloration degrade at side angles. The screen is not curved to try to diminish this effect as are some of Samsungs. By our best estimation, contrast begins to degrade at around 30 degrees off center. 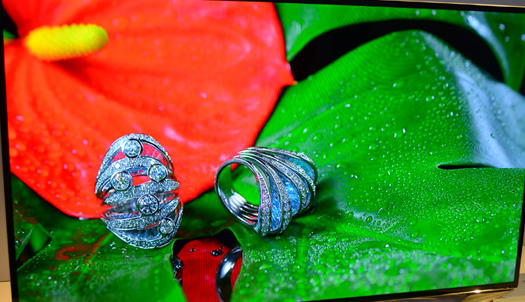 The P702ui-B3 is the only model of P-series with a differential in LED backlight zones with 72. It's understandable a larger screen would require more. We recommend leaving the local dimming setting on for enhanced contrast and black levels. Performance here was very good as this can be such a detractor with LED backlighting. This category of performance often changes over time but at the time we tested the P-series, we noted a bit more light coming from the center of the screen which makes sense since it has full array LED backlighting rather than edge lit. 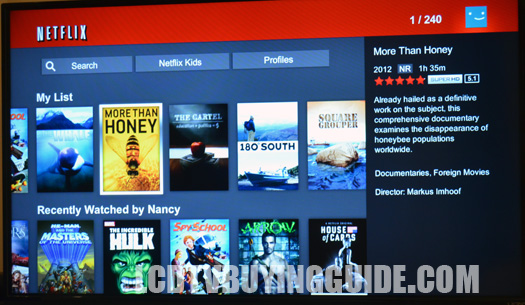 The P702ui has is very similar in design to the M series from last year. The biggest difference is the color of the finish. The P series features a dark metallic finish on the sides of the bezel. The ultra slim 8mm black bezel that surrounds the edge to edge glass of the screen is fantastic. The base and neck are made out of metal to give it a solid construction and feel. The profile is razor thin and competes with the best LED TVs on the market. It's not nearly as flashy as the other 4K TVs on the market, but that may not be a bad thing for those who want a traditional looking TV.

With the price now just above the M-series Vizio, why not spring for the P-series. Actually, the M-series may deliver you a preferred 1080p HD picture rather the the over-processed on on the P-series 4K TV especially given the dearth of 4K content. If you were wondering whether the up-scaling conversion of Vizio would be sufficient with HD signals, wonder no more, Vizio has even overdone it, and could not avoid visual artifacts in the the process. Nevertheless, we have to give the P-series Vizio an exceptional Value Rating with prices this reasonable. The P702ui-B3 sells for just $2500. Granted it does not compare in quality with our favorite picture on the X950B Sony, but neither does the price.