One growing picture trait of the Sony LED TVs that sets it apart from the competition is the colors are not oversaturated. In fact, for an edge lit LED backlit LCD TV they are somewhat subdued. I like the color accuracy emphasis of the newer Sony TV genre and that's also true of this edge lit LED Sony KDL-55EX620 a direct replacement for the EX600 that we reviewed last fall. 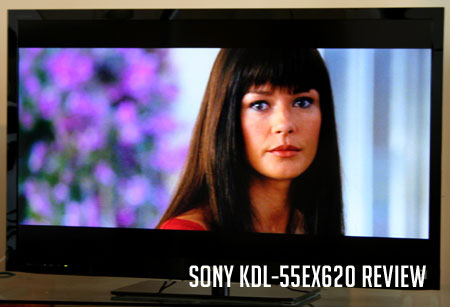 The EX620 produces realistic and vibrant images from brightly lit scenes such as this one from the Blu Ray of Oceans Twelve.

We have discovered that we much prefer clear coat screens over their filtered anti-glare screen counterparts. The latter come with a few too many issues. One such is weak side viewing contrast which the EX620 suffers from. Another is lack of dark shadow detail in areas where there is glare. Another is weak dark shadow detail in dark scenes when there is light in the room. Even though this EX620 produces excellent black levels in suction cup calibration readings, it doesn't appear that way to the naked eye when there is room light. So much for high technology.

The picture is much the same with Standard definition programming though I was impressed with the way the EX620 displayed some poorer 480i content through its composite input. This is counter to our processor testing results, but the eyeball is always the best judge. We did note a lot of motion lag in fast moving images and judder around image edges when scenes pan from side to side. Black levels remain inky with standard def content. As with HD, well lit brighter movies look good on this TV while darker ones fare a bit worse. 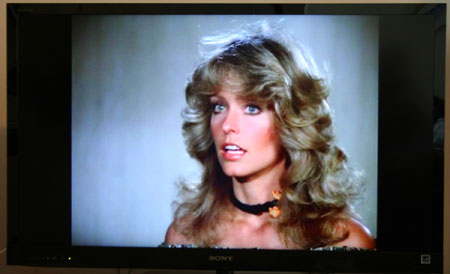 This standard definition shot from Charlies Angels (from Internet Video service Crackle) shows good flesh tones and definition but a little dimming around top corners of the picture.

Internet Options: Sony's improving Internet Suite includes Netflix, Crackle, Qriocity, Pandora, Hulu Plus, and You Tube among many others. We rate the Internet Suite on the EX620 as average.

The Sony KDL-55EX620 is a mid range Sony offering for 2011. At around $1899 we believe this TV will come down in price slightly through the year. It delivers a few extra features over the econo-models such as thin depth, a complete Internet suite, 120Hz, good black levels, and great design and appearance. It has its negatives as well as discussed above. Competition is from Samsung with the UN55D6300, the Panasonic TC-P55GT30 plasma TV, and the Sharp LC-60LE732U.