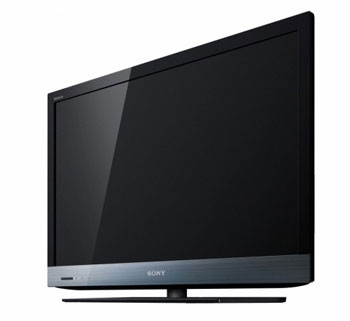 The one picture quality feature that is prominently left out of the EX520 series LED is the MotionFlow Hz rate feature which is designed to decrease judder and jerky effects caused by camera panning. In TVs of 46" and below this feature does become less important as motion artifacts are less visible on smaller screens. However, Sony's MotionFlow feature is pretty effective at its task so this feature is missed.

One growing picture trait of the Sony LED TVs that sets it apart from the competition is the colors are not oversaturated. In fact, for an edge lit LED backlit LCD TV they are somewhat subdued. I like the color accuracy emphasis of the newer Sony TV genre and that's also true of this edge lit LED Sony KDL-46EX520 a direct replacement for the Sony KDL-46EX500 that we reviewed last fall.

Sony has long touted the processing chip set engines in their TVs. We found the EX500 processing a poor performer. Sony is touting a new processor in the 46EX520 with the X-Reality processing engine (single chip in this model). This chip features some upgraded image enhancement to help improve picture quality and eliminate those nasty motion artifacts we found on the EX500. A couple more traits of the new processor are, "Incoming video is separated into constituent parts (outline, texture, and color/contrast), and the appropriate image enhancement is added to each part. The engine also uses Intelligent MPEG Noise Reduction to automatically detect the incoming sources and noise level to apply the appropriate amount of noise reduction for each scene."

The value oriented 46EX520 is not trying to blow you away with its looks. Like last years EX500 series LED, it is pretty sharp looking until you get up close and notice some of the more "plastic" feaures (both figurative and literal.) If having the hottest looking, thinnest depth metallic chrome bezel framing is important to you, this is not your TV.

Sony was the first out with a true Internet TV this past fall of 2010 with the GT1 series, enabled with Googles Chrome browser. The EX520 does not enjoy that much connectivity but it does have an impressive array of options through the Qriocity Sony Video on Demand App options including your standard choices HuluPlus, Pandora, Amazon VonD, You Tube, Slacker Internet Radio, Crackly, Hmm why am I not seeing Netflix here? Must be a typo in the specs from Sony. Does anyone dare not carry Netflix?

The TV has a built in Skype embedded enabled feature to allow for video chat.

3 or more HDMI inputs should be plenty on any TV. 1 rear ethernet port, 1 side USB port, 2 rear Component video inputs, and 1 RF.