That's my Yoda-esque way of saying the TV lacks picture depth perception. LED-LCD screens often do have this problem, though it can be more pronounced on some than others. That's the case with the Sharp LC-70LE745U. I would say this is one of the flattest screens we've seen in a couple of years partly due to the matte-type screen finish and partly due to the panel itself. A good plasma TV for instance will look substantially better in this area when comparing side to side or just straight on depth perception.

These large Sharp LED-LCDs have very bright whites so they eye-catching in the store. Plasma TVs by contrast look dim as the peak white do not compete. But take the TVs home and put them in a dark room with a colorful movie and you will see a much stronger picture performance on the good plasma screens or the better LED-LCDs that have overcome many of the negative picture symptoms of LCDs. But then if you need that super brightness and high whites for a brightly lit room, especially on football Saturdays and Sundays, then the Sharp LE745U will look very good. This TV is certainly a good choice for that type scenario.

After watching a bit of the Blu-Ray of The Fifth Element we immediately noticed the depletion of natural background blur. We've seen this before in other brands and it's always distracting when done to excess. In the Sharp, it's done to excess in 2012. It's actually a de-judder mode in that it removes that jerky motion you see when watching movies during motion scenes – thus Sharp's naming it the Film Mode. The tradeoff is not a good one in our opinion.

Turn it off for all film based content. Otherwise, you get a “soap opera” effect during films as background blur is eliminated. When you turn it off, you will likely notice some judder effects for a slight time until you get used to it. Ironically, you may want to leave the feature on for live action sports or other live fast motion programs as it delivers a smoothing quality, but turn the film mode off for film content. 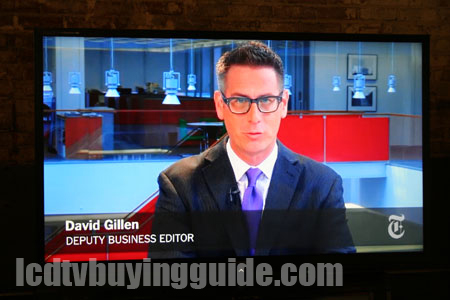 A news program shows some vibrant bright color on the LE845U

The LE745U comes with lots of good preset picture mode options. Here's a summary and our thoughts on each:

Auto – Automatically converts the picture into advanced Film Mode and does not allow adjustment of many of the individual settings within picture settings such as Black Level, Film, Active Contrast. Since you cannot adjust the Film Mode setting from this mode we recommend staying away from it. It sets the various setting depending upon what content is playing.

Standard – Sharp Standard setting is pretty good though colors are oversaturated and the setting comes with the Film Mode set to Advanced. So you will want to immediately turn that off when watching movies, film or the like. It's fine for live sports if you want the color to be juiced a bit.

Movie – We used the Movie Picture mode setting to calibrate the TV since it allows for 10 point white balance adjustment and the User Picture Mode does only allows 2 point WB adjustment. We found it to have a green push especially from side viewing angles even after calibration.

Game – Obviously this hyped mode should be used only for Gaming. It has a red push.

User – As mentioned above we did not calibrate from this mode due to it only allowing 2 pt. White balance adjustment. There is lots of light flow-through to the picture. Setting the Color Temp under the User Mode setting to Mid-Low produces a nice picture with lots of light. I like this mode a lot. Also take the Sharpness down to -10 and make sure the Film Mode is turned Off. I like this mode because it adds depth to the picture through use of the LED lighting.

Dynamic – Just stay away from this which creates false edges and over-saturated colors and extreme unrealistic brightness.

Dynamic Fixed – Automatically converts the picture into advanced Film Mode and does not allow adjustment of many of the individual settings within picture settings such as Black Level, Film, Active Contrast. Since you cannot adjust the Film Mode setting from this mode we recommend staying away from it. It sets the various setting depending upon what content is playing.

This TV has a semi-matte type screen finish which is not our favorite. We prefer the clearer coated screens even though they have a bit more reflection. Matte finish screens do still have glare from in-room lighting– just less reflection. The higher end TVs in the market have clearer screen finishes with more expensive screen filters that help reduce glare even though the panel is clear.

Color rendition looks good, but just a touch on the unnatural side. Our calibration picture settings to D65K returned a picture with a slight green push even after calibrating the 10 point white balance settings. Again, plasma TVs are much better in this area.

The active 3D on this massive television send full 1080p resolution to each eye so the LC-70LE745U doesn't sacrifice any detail in 3D and the image has plenty of depth. 3D works really well on a very large screen and it will definitely immerse you in the programing. Colors looked great, there was little to no crosstalk and I much prefer the 3D picture on this TV to the 2D picture due to the added depth perception and richer picture. However, there is a drawback. Sharp's 3D glasses are proprietary and generic active shutter glasses nor other manufacturers glasses will work with the Sharp TVs. The AN-3DG20-B glasses cost around $50 per pair, are big, clunky, ugly and will slip off your nose easily. Other than that, they do exhibit some flicker if there is a light source other than the TV in front of you. Those complaints out there, the 3D picture in a dark room scenario is great. Note to Sharp: we just need some better, cheaper glasses from you.

2D to 3D Conversion, Not so great

This feature is included on the LE745U lives up to expectations for poor performance. Some manufacturers have managed to make this feature acceptable and usable, however I would not recommend it on this Sharp TV. The 3 dimensional effects are very slight, the picture much darker, and considerable judder and jerky motion elements. It's not a feature you will use much.

Like many LED edge lit LCD televisions the contrast and color saturation starts to degrade once you get about 15 degrees off center on the LC-70LE745U and just outside the screen area and gets worse the more you go. I would say Sharp is one of the worst offenders in this area. The other problem is the severity by which they decrease in saturation – quite a lot. It's not even a picture worth watching from side angles.

The LC-70LE745U has a black brushed aluminum metal bezel framing. It's classy and refined and I like the feel of the solid metal. It's thin and the matte finish leaves no annoying reflection from in-room light. The TV is thin at just slightly more than an inch in depth (except for a protrusion in the back where the speakers are located) and the sides of the frame are very thin at .7" inches.

Sharp's built in Wifi comes in handy in the LC-70LE745U to connect to the Smart TV Internet options for 2012, but not necessarily the browser.

Sharp has a pretty well rounded Internet TV suite in what they term Sharp Smart Central. The only reason is due to the Vudu Apps app which helps round out the selection. Other than that, it's mostly just premium Apps which are prominent in the industry such as Cinema Now, Netflix, Vudu Movies, Blockbuster on Demand, Facebook, Twitter. A few of the Apps included with the Vudu Apps selection are: CNBC App, Discovery, Today, Picasa, New York Times, Ted Talks, CNN Daily, Nightly News (CBS). See our full Sharp Central Smart TV Review here.

A pic from the Picasa App

As you can guess by this reaction, we're not fans of the built in browser. It's a Sharp proprietary affair similar to Sony's and isnt worth a hoot. Just consider this TV as not really having a web browser and lower your expectations. And just in case you are wondering, no you cannot just access another search engine and get results that way. Searching for “Google” or “Bing” shows brings up Sharp results from their web sites (as in some document that contains the word Google) – PDF docs which will not even open once you click on them.

The long slender remote control has some very tiny buttons such as the Input button located just to the rigtht of the small channels control. It takes a little getting used to finding the small buttons. Even the 5-way controller arrow keys are too small which makes browsing and toggling between choices a little slower than normal. The menu broad categories runs across the top of the screen and then down the right hand side for breakdown choices leaving a large area for the content you are watching. The graphics and system is not attractive but work well and allow for a large picture viewing while making adjustments.

Value is what the LC-70LE745U is all about. Its got a strong set of features with varying qualities among them, but most of all its the price per square inch equation that Sharp is really winning on. Plasma TVs usually give these large Sharp's a good run for their money, but in 70” Sharp sort of rules the day with only a handful of TVs to compete. There are a few 65” plasma TVs such as the Panasonic TC-P65ST50 which sells for a similar $2500 or so. Samsung's new 75” ES9000 is much more expensive.