One of Samsung's best selling TVs from 2010 was the predecessor LN32C450 LCD TV. No wonder they decided to replicate with production of the LN32D450 which has many of the same features. Upgrade features include SRS TruSurround HD, a third HDMI input, the ability to watch video off a USB thumb drive and Samsung's AnyNet+ which allows communication between similarly equipped Samsung home theater equipment. 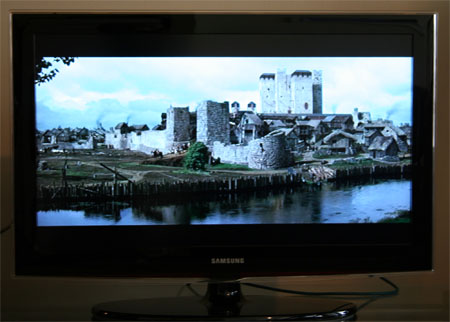 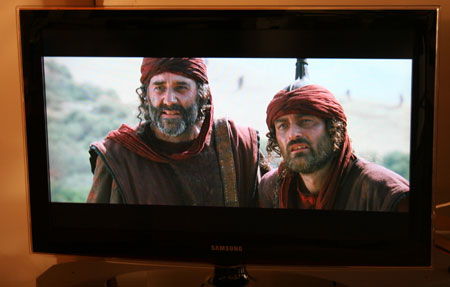 Light throughput on the LN32D450 was a slightly weak. A shot from the Blu Ray version of Troy

On a very positive note, once calibrated the D450 had good dark shadow detail with little definition lost in dark scenes.

Black levels in the 32D450 are below average for today's TVs. Post calibration contrast measured 1301:1 which is much better than we expected the 32" TV would yield.

The 32D450's LCD Panel has an inherent antiglare effect which will work well in rooms with lots of surrounding light. 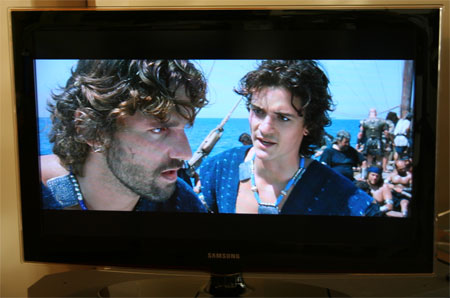 Even after calibration, color accuracy on the LN32D450 is a little off. Notice the turquoise blue in the uniforms of the Trojans in this scene from Troy

The Samsung LN32D450 does not have Internet feature functionality.

Aspect ratio picture sizing options include basic Zoom 1, Zoom 2, 16:9, 4:3. The algorithmic sizing remedies in the TVs processing do a nice job. Quick access to aspect ratio size is provided by the P. Size button on the remote control.

Audio Output Quality: There are two inbuilt 10 watt speakers. At 50% of volume the D450 produced enough output from a 10 foot distance. The sound output is of average quality. One option that helps somewhat is the SRS TruSurround option in the Sound Menu. Samsung's Clear Voice feature is not offered on this TV.