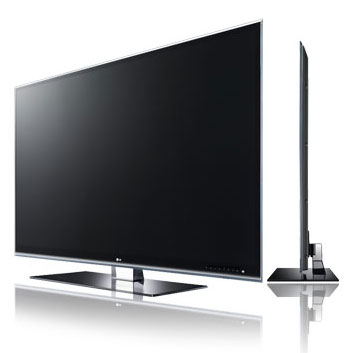 In late 2010 LG announced a new series of of televisions that they are calling NANO FULL LED TVs, this designation stems from the new type of backlighting found in these televisions. Using a thin film printed with a special light distribution pattern the NANO FULL LED TVs spread the LED backlighting more evenly to provide a screen with none of the hotspots or uneven lighting that is often found on edge lit LED/LCD televisions.

The NANO FULL LED 55LW9800 features a smoother picture thanks to true back lighting rather than edge lighting and full array local dimming with over 200 dimming zones.

The LW9800 of NANO FULL LED televisions is a step up from the other LED TV series and feature 3D compatibility, TruMotion 480Hz refresh rate, and sub 1 inch depth. The new backlighting scheme provides for local dimming and when combined with LG's Micro Pixel Control technology should offer enhanced black levels and contrast. The LW9800 series is also THX certified.

This super attractive TV has the a matte finish frame and super thin .8" panel depth. The bezel framing width of the LW9800 is super thin at around .5". The outer edges of the LW9800 are silver and this is only LG LED with a silver edge finish. The overall appearance is striking.

The new SmartTV options include currently around 120 Internet Apps with 20 of those being premium services like Netflix, Hulu, Amazon VOD. It has a special gaming app called I-play which is effective for gamers. The SmartTV function has a full web browswer through a proprietary LG platform and Plex platform.

One important upgrade to this TV is the manipulated 480Hz TruMotion refresh rate. LG was unable to tell us whether this is a true 480Hz or a manipulated 240Hz panel. The TruMotion Hz rate feature effectiveness has been good in the area of decreasing judder, but poor in the arena of providing a better viewing experience with film and broadcast based material. We've recommended turning it off in the past, but we're always willing to give it another shot.

Nano technology is new to LED TVs and introduced on the LW9800 as one of the prominent features. LG terms the feature, NANO Full LED, and the benefits are a super thin screen, finer detail in the imagery, and control over many more zones with true LED backlit (not edge lit) local dimming - allowing for higher resolution per eye during 3D viewing. Purportedly, the LW9800 NANO film screen panel has 288 zones of local dimming capability. The TV is super thin at only .8" depth. It does not have the Infinia glass from past models.

The uber cool Magic Wand remote is included in the high end LG 55LW9800, undeniably useful with the SmartTV (Internet Apps) features. Further, it is 1080p and Wifi ready with the Wifi adapter included in the price. It has 120Hz refresh rate (TruMotion is what the feature is called) and also DLNA certification.

Another new feature in the LW9800 series from LG is the 2D to 3D conversion. While I'm personally not sold on this feature, it looked pretty good in some instances in the LG display at CES.

Magic Wand Remote Control: We reviewed the magic wand remote at CES 2011 and are impressed with its fast flexible functionality. The point and click application was spot on from the IR remote. You can type as fast as you can point and click.