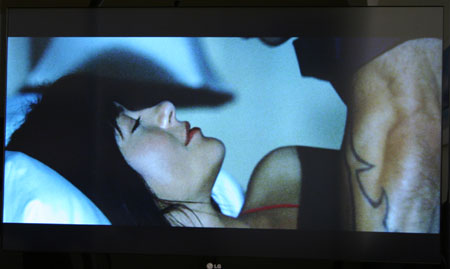 Despite a slight glare from the screen, the LV3700 delivers a crisp picture from the Blu Ray of Oceans 12.

The LV3700 does not contain the 120Hz feature so there is no need to worry about turning the feature off. For the most part the picture quality is very solid with good black levels and acceptable dark shadow detail. The screen is not clear coat but rather a common type of anti glare screen used on LCD TVs. Though we prefer clear coat screens due to additional depth, the LV3700 produced lively enough colors to satisfy us. Color accuracy was very good as well. On the negative side, there is some judder (jerky rather than smooth) effect when panning slowly side to side. 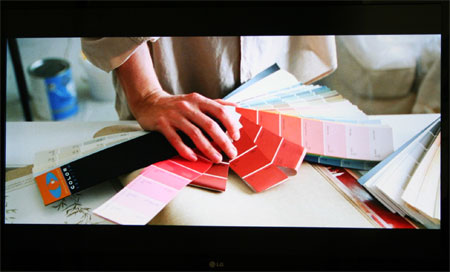 Another shot from Oceans 12 shows good color reproduction from the LV3700. 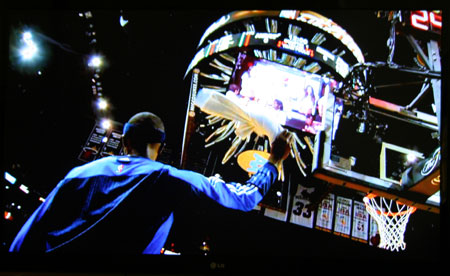 Since standard definition images can be somewhat dimmer than with HD, we recommend a different set of picture settings for lower resolution signals with this TV. Just use the Standard picture mode and change the color temperature to Warm 2. That should fix the Blue push. Edges are soft on this TV so leave the Sharpness settings reasonably high at a setting of 40 or more.

A shot from the 480i DVD of Tomb Raider in 4:3 shows pretty good picture quality clarity even from standard definition sources.

False Contouring/ Mapping: There was some slight mapping and grouping of color information in scenes and during our HD background testing.

Side Angle Viewing Quality: The LV3700 does a comendable job in this are which most edge lit LED televisions fail miserably. The TV manages to maintain solid contrast and blacks at angles with only a very slight decrease. The LV3700 is very unusual in this regard. 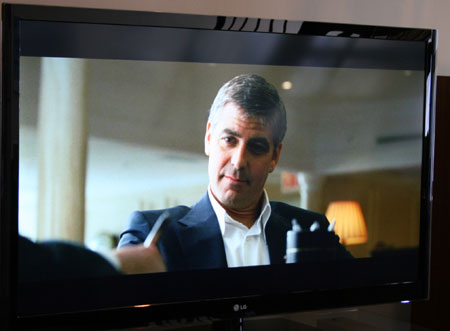 Despite just a little glare from room light this shot shows the excellent side angle viewing contrast on the LV3700 – one of the best LED edge lit LCD TVs in this difficult category.

LG NetCast Internet Options: LG is working hard to expand their Internet options. There are a few Internet options that appear to have been dropped from last years offering including Yahoo! Widgets and Skype. But other options have been expanded from the premium services Netflix, Youtube, VUDU, AP, Google Maps, Cinema Now, NBA, Facebook, and Twitter. There are currently 49 Apps in the LG Internet Apps store – not nearly as many as some competitors but the list is growing. A few we noticed include Yoga trainer, Horoscope, H&M Fashion, Color Blind, and a Paint App. It appears LG is concertedly playing catchup in this area and doing a reasonably good job at it. We are happy to report that the TruMotion feature and Picture Menu options can be accessed on the LV5500 with Internet options.

LG Apps offering at present around 49 Apps but plans for the list to grow quickly.

Video Aspect Ratio Sizing: The new Ratio button on the remote controls aspect ratio options which are: 16:9, Just Scan, 4:3, Zoom, Cinema Zoom and Set By Program. I'm a fan of the Set By Program setting as many DVD watchers will find this feature especially useful (aspect ratios on DVDs can be confusing). With the Set by Program setting, the TV automatically adjusts to the proper setting.

Inputs: 3 HDMI inputs and USB 2.0 access, 2 component, 2 Composite, Ethernet, and a 15 pin D-sub computer input rounds out an ample offering. There are included breakout cables for one set of component and composite inputs. 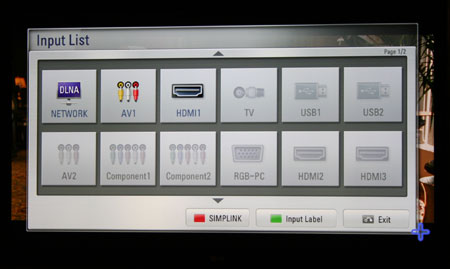 A shot of the Input selections on the LV3700 accessed through the remote control.

Aesthetic Considerations: The LV3700 is an attractive enough TV and has the same gloss black bezel framing that some of the higher end LG's contain. The frame is 1.5" wide and the depth of the TV is a scant 1". The table stand conveniently swivels side to side 20 degrees. 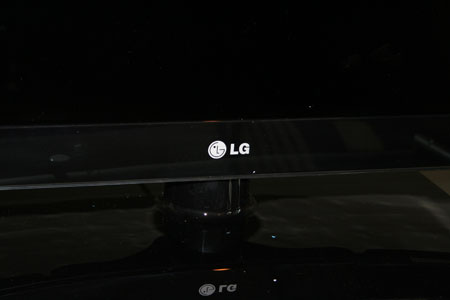 Remote Control/Menu Functionality: The Magic Wand remote control does not come with the LV3700 but may be purchased separately. It's a lot of fun to use and works great with the web browser so if you will be use the Internet features a lot on this TV, you might want to consider purchasing one. It's one of our highest rated TV products for 2011.

The "normal" remote control that comes with the LV3700 series is black gloss and has a very nice design with a slight bubble slope to allow for one handed use of many functions. It is well laid out and easy to use. The menu has large understandable graphics that make the LV3700 enjoyable and easy to navigate. There are special keys on the remote control for Internet Widgets, and Premium Internet Services. The Q. menu key helps with quick toggling for major controls such as picture modes. There is also a new Energy Saving button on the remote in the event you would like the TV to go to an auto dimming mode.

Audio Output: The LV3700 series LCD uses 15W X 15W speakers and LG's audio system from 2010 which eliminates traditional speaker drivers and contains speaker actuators around the perimeter of the entire bezel. Though the technical terminology sounds impressive we wish it translated into better practical performance as the sound quality is dim and shallow and sometimes lacks volume especially with film based programming. The Clear Voice feature usually helps and we recommend turning it on.