The 49UF6700 is one of the lowest priced LG 4K offering for the year and one of the better priced 4K LED TVs in the market. This model forgoes some of the fanciest features such as Harmon Kardon speaks and the cinema screen (almost frameless) design. It also has a lower TruMotion 120Hz refresh rate. However, it retains some of the critical elements of top LG TVs like the Magic Remote and the Tru 4K Upscaler.

Bright colors, tons of detail, and strong contrast are see here really show off the highlights of the UF6700 display

There is no more important component of a 4K UHD TV than the video engine – particularly the ability to upscale/upconvert resolution to the native resolution of the panel. While LG's offerings in general are not as strong as the best Sony models in this regard, they do offer considerably more value. The lack of 4K content is going to continue well into the future, so stellar upconverting of all manner of HD resolutions - 720p, 1080p, 480p is essential. LG's UF6700 ranks in the middle of the pack in this regard. There are some processing artifact with lower 480p and 720p signals. The higher up the HD chain you go, the better the clarity and detail to show off the native 4K resolution. The Triple XD Video engine is LG's processing engine from last year, so you save some money there, but it's not their best.

Colors do to render more depth and slightly better saturation in these new 4K models. LG contends this is due to their new Color Prime technology-which uses phosphor (colored) based LED lighting. Out of the box colors are over-saturated but after calibrating the picture settings or using the cinema (user) setting with contrast at around 80% you get natural, crisp colors.

If you are a 3D fan then LG has to be one of your top choices. Their passive 3D quality is some of the best in the market. The best part is the glasses tend to be lighter, more comfortable, and much cheaper for extras. There are no batteries involved and more glasses are included in the box. The picture displays a great amount of depth, rich colors, and good contrast from front and center. And it should go without saying that the 4K resolution adds even more detail and clarity. Brightness and side angle viewing are where the UF6700 loses some points when it comes to 3D content. The overall image seems a little dim and lacks the brilliance seen in 2D content. Side angle viewing is saved by the IPS panel. We see some loss of contrast as you move off-center, but color degradation is minimal.

Conversion of 2D to 3D

This feature is much improved and it's worth a try. Certainly not as good as real 3D, but in many cases I enjoy it more than the 2D version. The 3D button on the remote turns 2D content into 3D and back. Give it a try.

LG's UF6700 uses an IPS (in-plane-switching) panel. The IPS panels do a better job from side viewing angles but introduce more artifacts and have less black saturation than the non-IPS panels. There are still weaknesses in both with side angle viewing as contrast degrades, but generally the IPS panel is 20%-30% better from angles than non-IPS panel LED TVs. 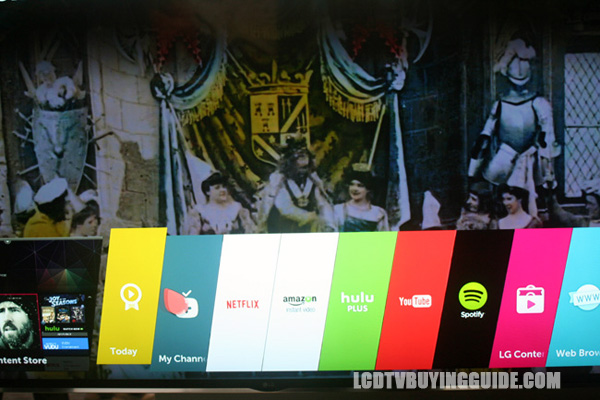 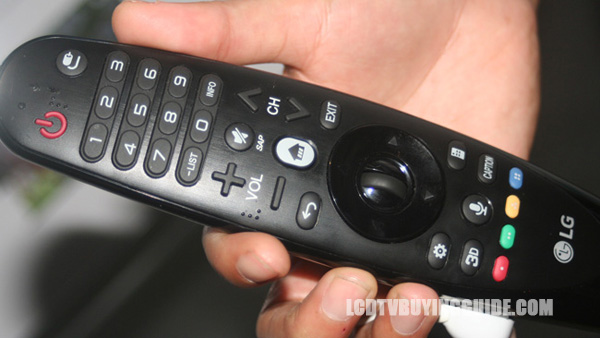 Simple is the name of the game here. Instead of a home screen with tons of buttons, you get a nice colored strip across the bottom of the screen populated with your favorite apps and the LG store. What you are currently viewing stays on the screen. Click the left arrow on the screen to see your open apps and the right arrow to show all the app downloaded to your TV. We are impressed with the speed of switching between apps. It is instantaneous. Two years ago a big complaint of ours was the poor streaming ability of LG's Smart TV platform. That's not the case this year thanks to the complete overhaul of the entire platform. This means the buffering times of streaming 2D and 3D content are greatly reduced. Overall, the move to a WebOS based system was a good move on LG's part.

Even though the UF6700 does not have the upgraded Harmon Kardon speaker package, sound quality is nevertheless better than the majority of flat screen TVs on the market. The Clear Voice II setting is our choice for settings.

The 49UF6700 has nice simple clean lines and a small half inch bezel frame. There is an indention for the bezel frame which is absent in the seamless design of the higher priced cinema screen design TVs. But for price considered, this one is more appealing to most.

With an price of $1100, the 49UF6700 is set to compete with the lowest price 4K TVs in the market this year. It's a nice “bridge” model for those wanting to future-proof for 4K content arrival, and in case OLED TVs ever come down to affordable levels. It compares comparably well in value terms with other offerings in the 4K market from Vizio. One detraction for some may be the only 2 HDMI inputs and 1 USB.