The 55HX750 series from Sony actually uses a matte-type screen finish rather than the Gorilla Glass Opticontrast panel on the HX850 and XBR929. The semi-matte screen does a decent job of presenting a good picture with the following strengths and weaknesses.

Color rendition is good and the TV calibrated near D6500K even though there is only a 2 point white balance control setting on this TV. The custom setting is set fairly close to D65 from the start. There are also only 3 choices of picture modes and no gaming mode on the HX750:

Vivid: Blows up the picture with too much blue, image enhancement and all kinds of false features.

Standard: Still too much blue push but definitely a saturated picture and OK for bright rooms if you turn off the other settings which interfere with picture quality (see Picture Settings).

Custom: Comes set near D6500 for a cinematic, film like picture. 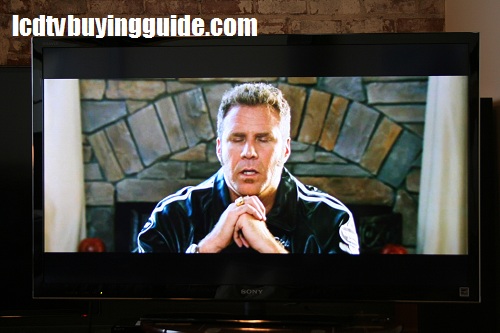 One calibrations are made the picture quality on the HX750 is very good from both HD and standard definition sources, though not as strong as those top units with a clear coat screen or top plasma TVs. The reason for this is simple. A matte screen (some call them anti-glare) is a cheaper way to cut down on reflection. The resulting image produced is flatter, and even though the contrast of this TV is very good at 2500:1 post contrast – it cannot keep up with those top units in saturation and color detail. Secondly, side viewing angles contrast and saturation degrade pretty quickly at 20 to 25 degrees off center and get worse the further to the side one goes. This is the case with all matte-screen LCD TVs that we have tested. Front and center, you will see a very good colorful and accurate picture, but from the sides you will be disappointed. Light output is good, as are black levels and shadow detail.

First, note that you do not get 1080p full resolution to each eye during 3D programming as with Panasonic and Samsung, therefore the glasses for those models do not work with the HX750. Other than that 3D viewing was very decent and we had not real complaints except that at side viewing angles you do lose saturation and contrast same as you do with the normal non-3D picture. 2D to 3D conversion was better than expected.

Other Picture Features and Settings

The KDL55HX750 has an ambient light sensor included which automatically adjusts the TVs light output to in-room lighting. It's an interesting feature and the masses may want it and use, but its likely not for the purist as it causes a little bit of flicker when scenes change from bright to dark.

Cinemotion: Off, Auto 1 and 2. Feature does not distort background blur too much.

Motionflow: The picture seemed better with this feature in the Off position. Use the Standard or Clear settings if you want to use the feature. The feature does decrease judder and jerky camera panning somewhat and this may be especially useful for sports programming. Fluidity in the picture during fast action or camera panning is the objective of the Motionflow XR 480 feature. The 480 specification is to alert you to the fact that the backlight is helping to make the native 240Hz panel process faster. Results are usually quite mixed on these features with fast action sports looking great and movies and other film based material having some complications.

There are so many other picture adjustments like an Auto Light Limiter, Clear White adjustment, Live Color, Advanced Contrast Enhancer (automatically adjusts contrast) and an Auto Light Emitter (adjusts backlighting for bright scenes. There is a ton of picture technology in this TV. Most, unfortunately are better left off from our testing. 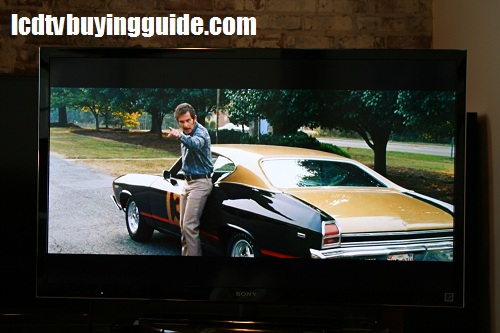 A pic from the same source shows nice dark shadow detail in the background and color rendition.

The X-Reality Pro video engine created by Sony in 2011 and continuing into 2012 is known for optimizing certain sections of the on-screen content and displaying each section optimized for color enhancement. Sony has been known for their processing engines for some time and this is an exceptional one.

The HX750 series includes the Sony Portal with the Sony Entertainment Network and its Apps or Streaming Services as Sony calls them. From my perspective the Sony Portal is useless. Finding and selecting this option from the Internet Apps menu takes you to a Sony page with a very small top right search bar. Click on this option takes you to a page that says Internet Browser. Typing in a search such as “U2” and pressing enter takes you to the Sony page, where you must click the right arrow to go to a Sony Search Results page that brings up results from Sony's blogs. In other words, this is not a true Interent browser, it's a Sony Promotional Internet browser and a poor one at that. Not only are the results poor-to-irrelevant they are difficult to access. For instance, a search for “Google” brought up options to click on Sony's Goolge TV – and slowly at that. After retrieving the results, you cant even access them.

The Sony Internet Portal (Internet Browser) was a big disappointment and slow to use on the HX750.

That said the normal premium Internet choices are fairly easy to access and include Netflix®, Pandora®, HuluPlus™, Amazon Instant Video, YouTube™, Slacker® Internet Radio, Crackle and social networking through Facebook and Twitter as well as others. Sony claims Yahoo! Broadcast Interactivity Widgets as well. This new platform allows one-click access to TV Apps which are related to the content you are watching on the TV. In other words, it's a convenient way for Sony to market their Apps to you if you are so inclined to use the feature. On the other hand, it does make it easy for you to know which Apps you might like.

We had some frustration when accessing the Apps. You actually have to access the Internet Apps through the Home Menu button then scroll to the Internet Options. Pressing the Internet Apps button only brought up the Yahoo! Weather Widget. As well, some load slowly and response time when turning on the TV is generally slow as well. Here is a run-down of a few Apps that we rated: 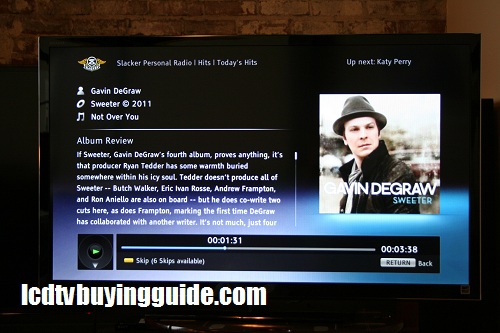 Yahoo!: Widgets Internet Apps Button on remote takes you there.

Dr. Oz: Short tips on better health. One minute videos. Rating 3 out of 5.

Crackle: Has 220 free movies (with ads) but some pretty good choices 4 out of 5.

Slacker: Personal radio with lots of music choice. It gives some commentary on the tunes and you can set it to a genre and just let it roll – providing background music if you want 4.5 out of 5.

Sony Digital Concert Series: A limited selection of 7 live concert recordings from Creed, ThirdEyeBlind, and Chickenfoot – at least that's all they have at the time of this writing. Recording quality is average and is of the whole concert. Rating 3 out of 5.

Bilabong: Poor quality Surfing and island clips. Rating 2 out of 5.

Apps are somewhat slow loading. When I tried to load the NHL Vault App, the menu prompts me to go online from a computer to register for the service.

The speakers in the Sony KDL55HX750 do a reasonable job with plenty of treble and volume although it gets a bit muddy with some DVDs at higher volume. Listening to Gavin Degraw's Not over You from the Sweeter Album, the HX750 did a nice job with everything but bass, which is understandable from this size speakers.

The HX750 has much the same appearance as last year with clean lines, less than an inch frame width and a chrome strip around the edges. The stand a rectangle is solid, swivels, and is black gloss. Screen depth is less than 2” except where the speakers jut out in the back at the very bottom. But it gives you that super thin appearance.

The non-backlit remote is pretty boring. The Home button controls the menu and you will use it often. The Internet Apps button does not actually take you to the Internet Apps (only Yahoo! Widgets), The small 3D button atop the remote does allow for quick transfer between 2D and 3D content or conversion of 2D content. The wide button controls aspect ratios. 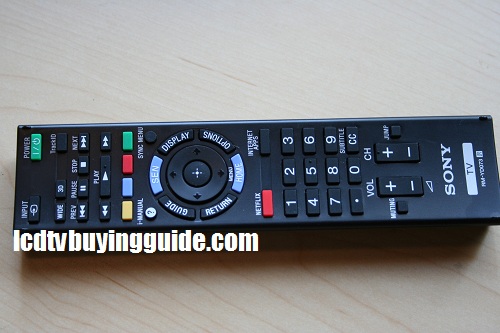 So what kind of value is the KDL-55HX750 at $1899. Well, certainly better than the 46” version which costs $1499. This is a solid TV with a good, but not great picture. It's loaded with features too, some easier to use than others. There are some frustrating aspects to this TV which are hard to overlook. There are no 3D glasses included with the HX750. With other LED TVs this set competes OK on price. The LG 55LM7600 or the Samsung UN55ES6500 are pretty comparable units, though less in price.