This is one of Sony's top end TVs for 2012 and has the unique OptiContrast panel which is Sony's way of telling you that contrast is very high – that is deep, saturated blacks and very bright white and lights. Light coming through images is very good and we are impressed with the 3 dimensional quality of 2 dimensional programming. The edge lit LED backlighting is dynamic – meaning it can be manipulated to act more like local dimming backlighting than ordinary edge lighting. This helps provide more concentrated contrast to localized areas – creating more depth in the picture images.

This upgrade feature in the KDL-46HX850 creates the 960Hz frame rate effect by manipulating the backlight through the local dimming mechanisms in the backlight. This is processed and achieved by the local dimming of hundreds of zones in the TV. This difficult panel process achieves extremely fast processing that removes lots of judder effects and an blurring in fast motion objects. The feature works well and even gives you various options from which choose such as Standard, Smooth, Clear, and Clear Plus. In the KDL-46HX850 we prefer the Smooth or Standard Settings, but it is difficult to tell the difference. Leaving it Off is always a good option as well.

A shot from the BluRay of Blood Diamond shows lots of accurate color and sharp dark shadow detail.

This combines with processing from the X-Reality Pro Engine to deliver a very sound picture in terms of stability. There is not much judder when leaving the Motionflow and Cinemotion features off and there is almost no artifacting. This is due to superior processing from the video engine in the HX850.

We recommend leaving the Cinemotion feature to the off position due to unwanted side effects from the de-judder processing that this function takes on.

Viewing Angles are still challenged on the HX850 though saturation and contrast do not degrade as much as the HX750 model from 25 to 30 degrees off center. The picture from the HX850 also has more depth and life to it.

Thanks to the excellent processing and color rendition offered the HX850 delivers a very strong picture quality performance for an edge-lit LED/LCD TV.

This panel is composed of Corning Gorilla Glass and is the premium screen for Sony in 2012. It provides better durability, contrast, brightness, and minimizes unwanted reflections. The key component of all these is its ability to minimize reflection, which it does very well and much better than the HX750. Blacks also appear much stealthier in this screen compared to Sony's models without this panel and they are some of the best black levels to be found in LED backlit Televisions in the market.

The HX850 series includes the Sony Portal with the Sony Entertainment Network and its Apps or Streaming Services as Sony calls them. Keep in mind that the Sony Portal is not a true Internet Browser. It is just a feature that searches Sony's sites, not the entire Internet. It's also frustrating and slow to use, in addition to being difficult to access. 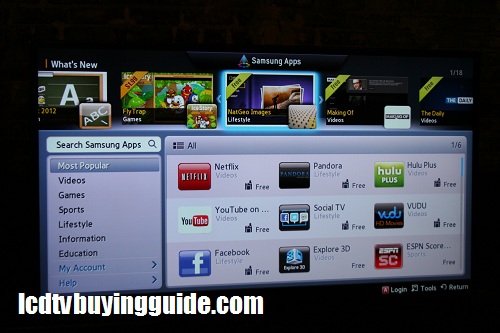 The Sony Entertainment Network Home page (if you can connect)

The premium Apps in Sony's Smart TV selection areNetflix®, Pandora®, HuluPlus™, Amazon Instant Video, YouTube™, Slacker® Internet Radio, Crackle, NHL and social networking through Facebook and Twitter. Sony claims Yahoo! Broadcast Interactivity with auto-content recognition as well. This new platform allows one-click access to TV Apps which are related to the content you are watching on the TV. In other words, it's a convenient way for Sony to market their Apps to you if you are so inclined to use the feature. On the other hand, it does make it easy for you to know which Apps you might like. Sony's additional Apps do not stack up to Samsung's standard in this regard. There are few smaller additional apps that are worth any time and actually there are not many Apps period.

SEN – Sony seems very proud of this the Sony Entertainment Network and there is a dedicated button on the remote for this. There are music clips of 30 seconds? Videos to rent for $4.99 or $5.99 through the Video Unlimited, and your selection of the premium Apps listed above. That's about it. Basically, it allows you to get to the Apps quickly without having to go through the annoying menu.

Wired - Videos of gadgets and technology projects from various sources – not necessarily Wired content. One of the reviews from Wired's Game Life was from gaming reviews in 2009. Rating: 2.5 out of 5.

WWW. - this is supposed to be a browser but it's really just Sony's search tool for their own sites. Rating: 1.5 out of 5. 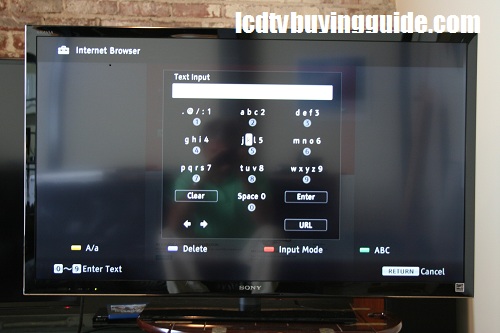 Sony continues the elegant and understated monolithic design element in 2012 with the HX850. It also has the Gorilla glass LED cover screen which purportedly helps allow for its super thin design, and lighter weight. It is less than 1" in depth on the sides of the panel. The Gorilla Glass overlay panel extends all the way to the metal edges for one smooth front (hence the monolithic name). This is also an advantage over the HX750. 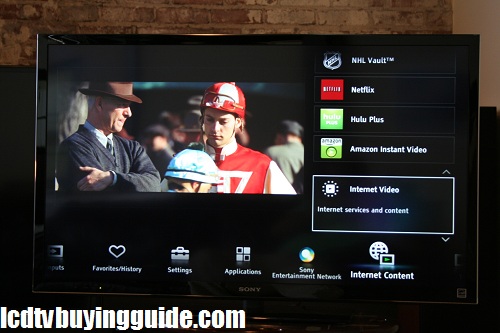 The Sony menu in the HX850 with inset movie playing.

There is built in wifi, but I found that I had to remind the TV that I had already connected wirelessly to it through my router. It tends to “forget.”

The speakers in the Sony KDL46HX850 do a reasonable job with plenty of treble and volume although it gets a bit muddy with some DVDs at higher volume. Listening (through Slacker) to Gavin Degraw's Not over You from the Sweeter Album, the HX850 did a nice job with everything but bass, which is understandable from this size speakers.

While we must take a couple points away from the KDL46HX850 just because it is only 46”, it's actually competitive even at nearly $2000 for those wanting a premium picture quality in beautiful casing. Competition abounds from the likes of Samsung with the UN46ES7500 or LG with the 47LM7600.