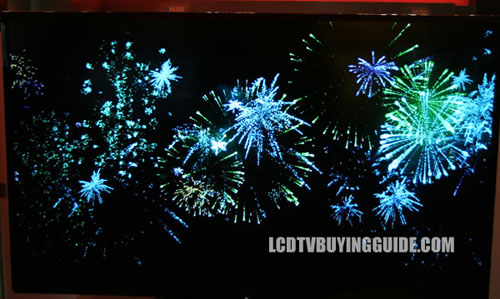 The LC-80LE757U 2nd down from the top models in Sharp's LED TV lineup for 2013/14. That is, if you don't count their 4K UHD entries. This model can be found on the market in spring of 2013 all the way until the spring of 2014. There was not an 80 inch 7 series entry last year. Feature-wise it has the Quattron technology, 240Hz panel, and an ultra slim aluminum design. Peak whites are very bright. It also has active 3D viewing. Smart TV is present as well with a dual core processor. 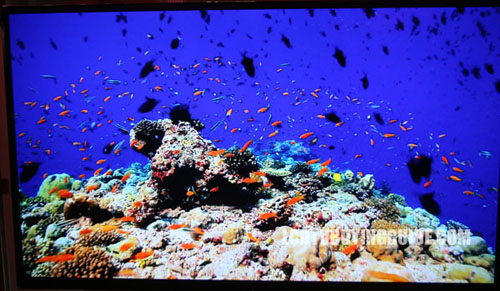 From front and center with little to no light in front of the room, the 3D viewing on the LC-80LE757U looks very nice. The added depth from the active 3D keeps you feeling very involved.

Though not of the top measurement in either of these areas, the LC-80LE757U has decent black levels and the contrast is actually pretty stout due to the peak whites. Black depth suffers from side angles. 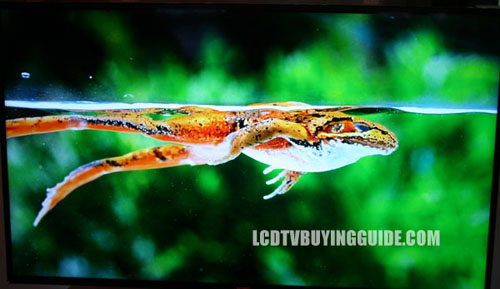 The LC-80LE757UU has a black brushed aluminum metal bezel framing. It's classy and I like the feel of the solid metal. The frame is even thinner this year and Sharp has named it the Ultra Slim Aluminum design. The matte finish leaves no annoying reflection from in-room light. The TV is thin at just slightly more than an inch in depth (except for a protrusion in the back where the speakers are located) and the sides of the frame are very thin at .6" inches.

Sharp's built in Wifi comes in handy in the LC-80LE757U to connect to the Smart TV Internet options for 2013. There is a dual core processor to allow you to watch TV, while toggling among Smart TV options. The processor also speeds the Smart TV functions somewhat.

Overall, the Internet TV suite gets by OK. The Sharp Smart Central has Vudu Apps as its main delivery device. Other than that, it's mostly just premium Apps which are prominent in the industry such as Cinema Now, Netflix, Vudu Movies, Blockbuster on Demand, Facebook, Twitter. A few of the Apps included with the Vudu Apps selection are: CNBC App, Discovery, Today, Picasa, New York Times, Ted Talks, CNN Daily, Nightly News (CBS). See our full Sharp Central Smart TV Review here.

Competition doesn't really exist in the 80 inch size range. 75 and 70 inch LED TVs from others like Samsung and Sony are where you will find similar offerings. The Samsung UN75F7100 is one that should compete well against this model. Sony's KDL70R550A is another example of a more scaled down large format TV. If you take it on a price per square inch of viewing area, this 80 inch Sharp LC80LE757U offers a great value.