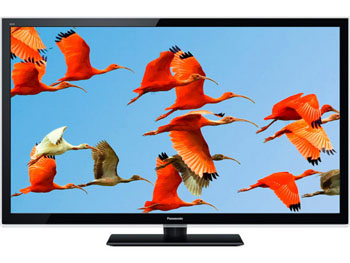 The E50 series is the highest end, non-3D LED TV line from Panasonic for 2012. The TC-L47E50 has a 47" 120Hz, 1080p panel with 360 Back Light Scanning that emulates a higher Hz rate by manipulating the televisisions back light. FOr Smart TV online features the E50 has Viera Cast which is what Panasonic calls thier online features.

Panasonic has improved the picture quality in their LED television for 2012 and really seems to be making more of a push into LED/LCD TV market this year. Black levels and contrast are stronger as is color performance and the TVs have more robust feature sets.

The E50 series has what Panasonic is calling 360 Backlight Scanning, the panel in the TC-L47E50 is 120Hz and then the LED back lighting is manipulated so the TV appears to have a 360 Hz panel. This is used to eliminate judder in film content and to lessen or eliminate motion blur in fast action scenes on the TV.

The E50 is surrounded by a 1" wide, semi-gloss black bezel that ends in a half inch of clear acryllic. The semi-gloss bezel does not reflect as much as pure gloss so it is less distracting. The included table stand matches the bezel giving the TC-L47E50 and understated classy look that wouldn't look out of lace in any TV room.

The E50 has access to the basic features from Viera Cast, streaming video from Netflix, Hulu Youtube and more. News, weather, sports and financial apps and social media access with Facebook and Twitter. There is also online music from Pandora and Napster.

With the Viera Remote app you can control the TC-L47E50 with a smartphone or tablet. It supports use of the touch screen on your phone and the phone's built-in keyboard as well as displaying web pages and video from the TV to phone and vice versa.