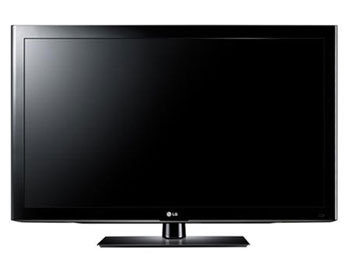 LG may have little competition in the large LCD TV category. Not many of the other manufacturers seem interested in competing for this value oriented space.

One of the highlight features of this 1080p full high definition LCD TV is the 120Hz TruMotion feature that increases the refresh rate from 60Hz to 120Hz for reduction of judder and jerky effects from fast motion and camera panning. It's an effective tool for sports programming but, we've advised users in the past to turn off the 120/240Hz feature when watching film and broadcast based video content, and our sentiments remain the same. It introduces too many unnatural artifacts. After doing so however there are some very nice picture attributes to this TV including good black levels, natural beautiful colors, and plenty of dark shadow detail.

Viewing angle is usually somewhat impaired and contrast begins to degrade at around 30 degrees off center. But colors are crisp and not oversaturated like many LED TVs.

The picture is not as bright as an LED (thank goodness), that's cranked way up in contrast, but provides plenty of brightness and contrast for 90% of viewing content.

Appearance is not a focal point for these new LCD TVs as they give way to LED backlit LCDs in the aesthetic department. The plastic black slightly brushed gloss framing bezel is not bad looking - has slightly sloped edges and is about 2" in width all the way around the screen. Panel depth measures around 2.5 to 3".

The LK520 series does not have LG's improved SmartTV functionality for Internet TV. However, LG does have a SmartTV upgrader device called the ST600 Smart TV Upgrader which would allow you to receive all of LG's new Internet TV features. It is sold seperately.