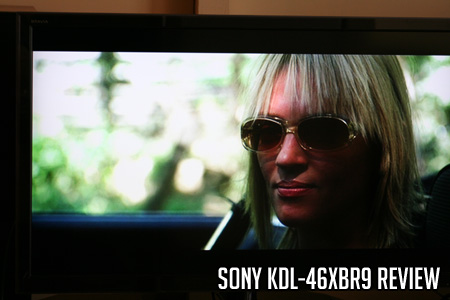 Though up conversion from 480 signals was mediocre on the XBR9, this shot of Uma Thurman in Kill Bill  turned out well - showing good contrast and shadow detail.

Calibration Notes: They XBR9 was more difficult to calibrate than many recent TVs. There is error occuring in varying ire points creating a condundrum in where to tighten up color and where to just allow it to fall where it will. Gain controls may only be reduced on the XBR9, when we needed to drive blue up. We ended up with error in the 40, 50, 60 range opting to let the middle float and keep the ends of the scale on scale. Off axis viewing dramatically affects blacks and grays when calibrating - making calibration difficult when color shifts at varying angles. See Viewing Angle section for more.

480i DVD and Broadcast Viewing: Generally, we were not all that impressed with the picture quality with 480i signals. Since the majority of programming we watch is not HD, this is an important consideration. While the 240Hz feature did a nice job at times with smoothing out side to side panning, there was still jerkiness present at times. We were pleased that the 240Hz feature did not introduce the cardboard cutout effect that occurs with some TVs with high Hz rate processing. Colors did not pop enough, and the picture was generally too subdued and dark when viewing a lot of  480i programming. And lastly, there was a good bit of grain/motion artifacts visible.  During 480 HQV processor testing we noted average noise reduction which coincided with our content viewing. 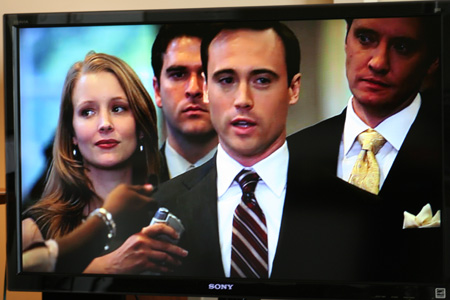 A scene from The Good Wife shows decent brightness but not great color saturation.

720p/1080i/1080p Picture Quality: HD picture quality was much crisper and colors are more saturated. Blacks become slightly hazy at side angles but straight appear plenty saturated. I beleive the anti glare technology introduced into the LCD panel creates most of the weakness issues with color calibrations and off angle viewing. Dont misunderstand, the HD picture from Blu Ray and Broadcast HD was clear, vivid and colorful as always, but alas the image does not appear as deep as some of the better pictures we've viewing lately.

Black Level/Contrast: Post calibration ANSI contrast measured an unexceptional 750:1. That's a lazy figure for today's better TV set. Black levels can appear oversaturated and hazy at the same time with some 480i images - hampering shadow detail. Rich, deep blacks may be found with the best HD content out there - but they are not a common feature of this TV. 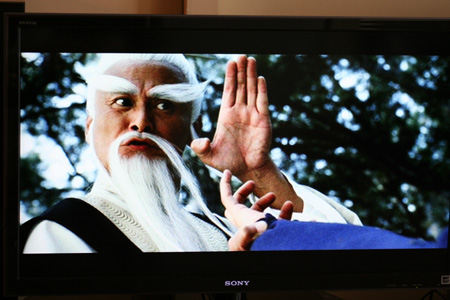 While the XBR9 didnt measure great in contrast, this scene from Kill Bill produces extreme white and black levels.

Dark Shadow Detail: Oversaturation of blacks in dark scenes causes loss of shadow detail at times especially with normal broadcast or 480i programming. With HD content this issue pretty much goes away the the TV does a good job.

Color Rendition/Color Accuracy: Flesh tones appeared quite realistic after calibration, but all colors seem too subdued. Despite not being able to dial into D6500 perfectly during calibration, we didnt find many problems with color presentation.

Viewing Angle/Off Axis Viewing: There is a big problem with color and contrast loss when viewing this set from just 25 degrees above the center axis. Grayscale colors change, and contrast decreases. When viewing from direct eye level, this occurs from side angle viewing starting between 35 and 40 degrees. The TV can be viewed from severe side angles, but contrast is reduced and colors will be less rich. 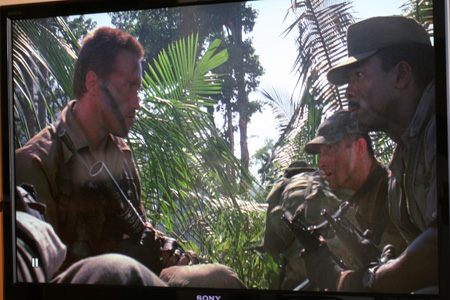 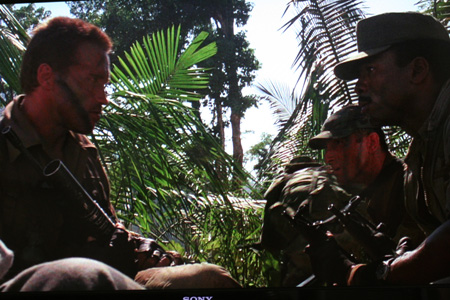 Motion Lag: There was some shutter effect (picture shaking) with 480i signals, but overall the 240Hz  Motionflow feature did a nice job of reducing, but not eliminating, side to side jerkiness found with so many LCD TVs.

False Contouring/ Mapping: We did not note any banding or false contouring present.

Obviously one of the major features of this TV is the 240Hz option. The fact that we could actually use this feature with film and broadcast programming without unwelcomed background information is a major plus. This prevents having to turn the feature off and on depending on viewing content, which is the case with some other branded TVs with the high Hz rate. However, the 240Hz rate Motionflow feature was not as powerful as on some branded TVs with the same feature, therefore the XBR9 did not do as effective a job of cutting out motion lag and side to side judder effect. There is the now standard inclusion of a USB port for digital pics and videos from Sony cameras or flash memory drives. TV guide on screen is another present feature which gives the option of a guide with over-the-air antenna or with cable service but without the cable box. Internet features are discussed below. 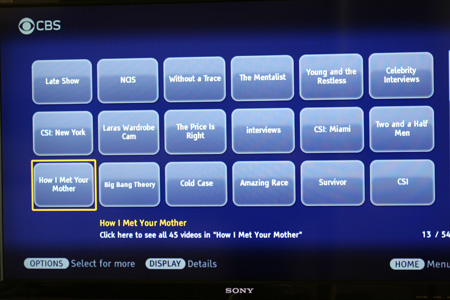 Why anyone would want to watch a 45 second clip from varying CBS shows we're not sure. These appear to be advertising for CBS to entice viewers to get interested in their network television series.

Internet Connectivity: Use the inbuilt LAN connection to connect to the Bravia Internet Video, which serves as a gateway to select Internet conent including some on-demand options. These include CBS, Sports Illustrated, Netflix (coming soon), and Amazon on Demand. Some of these options may actually be useful in the future and not just good for a quick run through. Bravia Internet widgets allow the user to access proprietary weather, stock, and news information through the Internet. 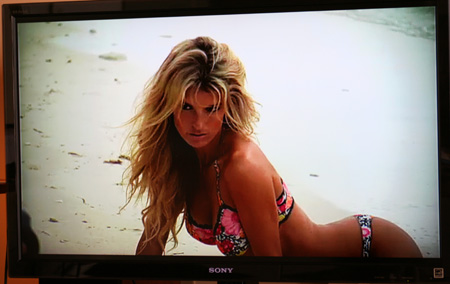 A nice shot of Marissa Miller being shot for Sports Illustrated Swimsuit edition - one of the more interesting options available on the XBR9's Bravia Internet Access.

Aesthetic Considerations: This TV has simplisticly beautiful aesthetics with the thin gloss black bezel framing measuring only 1.25 inches in width. This type of design does not take away from the on screen picture and allows for considerably flexible when planning a space for the TV.

Remote Control/Menu Functionality: There are ample keys on the backlit remote control. Buttons are a good size and easy to use once you get used to placement. A new addition is the Internet bar on the remote with video and widets options so that the viewer can view the internet programming while watching their normal programming.The Xcross Bar menu system is getting a little dated. While the it looks nice, I find it slow and cumbersome to use. There are tons of options to play with in the varying menus on this TV.

Audio Output: We found the speakers very powerful for a thin TV with a small frame. Volume at the 30% level was plenty ample to fill our review room. Seperation between background noise and voice seemed much better on this TV than most we review.

Sony is rarely accused of underpricing their products and the KDL-46XBR9 is no exception to that guideline. At $1899 this is a fairly pricey LCD for its feature set. The Samsung LN-46B650 competes well feature and picture quality wise with a $1449 price tag. The LG 47LH55 has almost identical features with an very good picture quality for $1200. The Sharp LC-46BD80U has 120Hz feature and a built in Blu Ray player for $1449. And lastly, where value is concerned we must not ignore a plasma like the Panasonic TC-P46G10 which needs no accelerated Hz rate feature and sells for $1249.