The E70-C3 model has a 120Hz native panel with 240 “effective refresh rate”. It also has 4 HDMI inputs and a higher color range.

Vizio's 70-inch product is of a similar package and quality to last years. There are a few upgrades and downgrades. Price is of course one of the most attractive features. The E70-C1 features full-array LED backlighting instead of the edge-lit variety on most low to mid grade LED TV products. The 70 inch size has 16 zones of Active dimming for enhanced contrast, more than the smaller sizes and same as last year. Vizio Internet Apps Plus is also included in the E series for the first time. 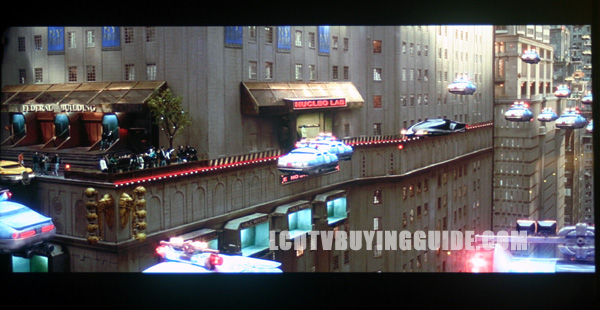 The E70 has a good quality picture after calibration. Picture depth is pretty solid from front and center.

The Vizio E70 is an excellent choice for an entry level TV. The “E” stands for “Entry” level after all. One attribute that makes the E-series compelling is the 16 active full array backlighting zones resulting in a more even distribution of backlighting with less clouding/blooming than mid grade edge lit LED backlit TVs. The 65”-70” have 16 zones, the 50” to 60” have 12 zones while the 48 inch and lower have a still ample 6. More zones are better because their divisions become less noticable to a watchful eye, but the smaller screen sizes do not need as many since the zones are smaller. While the full array backlighting delivers better screen uniformity when displaying blacks and dark scenes, we did not see a better contrast benefit from the local dimming on the E-series. Colors also going benefit from this backlighting scheme, as there is less washout and uniformity issues. Also, the 120Hz effective refresh rate with a 480 Clear Action Rate backlight scanning feature improves judder and motion blur. The Clear Action Rate feature may produce negative effects in some circumstances and is better left off for movies and regular TV programs.

The E-series certainly doesn't compete with a plasma or OLED display in terms of picture depth and color, but it's a clear winner when it comes to picture quality and screen space for the price. Darker scenes end up looking a bit flat and blacks can look as if there is a haze over them, but the uniformity is good. Colors also seem a tad bit washed out and leave a little more to be desired.

Black levels end up being somewhat flexible thanks to the Black Detail option in the Advanced Picture Settings menu. It provides a much needed contrast boost which gives the picture a more three dimensional quality. Colors pop a bit more too. This is a case where I made a rare exception and prefer the Black Detail on the high setting. We normally stray away from settings like this since they typically don't benefit the overall picture quality. That's not the case here.

This is a shot from an HD broadcast. Detail and sharpness are high points here while color seems a bit lacking

The Film Mode does cut down slightly on judder from movie-source programming with no noted side effects. We're typically skeptical of this type of de-judder feature but on the Vizio e-series the effects are subtle enough to be of good use.

Screen glare is an issue that will really show up at night from in-room background lighting. Arrangement of lights will become important. The lower quality screen on the E-series models does not contain an ample amount of light absorption techniques.

Side angle viewing is lackluster due to the semi matte finish screen. It degrades relatively quickly but performs better with the Black Detail setting on high. There is contrast and color saturation reduction starting at around 20 degrees off center, but becoming pronounced at 25.

Getting to the game mode is a simple change of the picture setting. A 40ms measurement isn't bad at all and will be hard for most to notice

The Vizio E-series has a dedicated picture mode for gaming. This is for optimal performance when it comes to input lag. The TV responds fairly well in our tests. We measured input lag at 40ms. That's not too bad at all for the average to hardcore console gamer. Shooters, racing, and action games play just fine on this TV. 30ms and below are considered excellent measurements, so this Vizio stands with the best of them. Since the Game mode is its own picture setting, you may have to dial in some of the calibration settings again to get the best picture. Do it once and you are all set.

Choosing the best picture mode for the E-series is extremely important and Vizio provides some strong choices: Standard (energy saving mode), Calibrated, Calibrated Dark, Game, Computer, and Vivid. The calibrated and calibrated dark modes are the best choices, with only the backlight strength being the difference between the two. I think that Calibrated mode is my choice mode for most situations. Here I saw plenty of dark shadow detail combined with a full backlight setting to give the picture much needed punch. Overall, the two calibrated modes available are the way to go when you want the best picture out of this TV. Try the others out if you need to push the brightness a bit more depending on the room the TV is located in. From Calibrated Mode use the following settings for calibrated picture settings:

The OPC (Optimum Power Control) control is very hidden in the menu of the E-series Vizio TV, but it can and should be turned off due to the distracting influx and outflow of light/brightness produced by the backlight. Out of the box, it will be set to On position for any of the preset picture settings. When I recently retested the e-series from Vizio I found it added unnecessary picture noise when light flow moved up or down lagging the picture image. The OPC's purpose is to save energy by manipulating the backlight through the 18 backlight zones, or probably more accurately to lower the Energy rating for Vizio's TVs. But at less than $1 a month total, and just a few cents per month for the OPC feature, you probably prefer a better picture. To turn it off: Go to Picture Settings, scroll down to More, Scroll down and click Advanced Picture at he bottom of the menu, this will finally bring up the Backlight Control as the very last setting. Turn Off.

Normal, Wide, Stretch, and Zoom modes are controlled by the diminutive "wide" button on the bottom left of the remote control face. With HD programming your normal and wide selection will appear the same and of course there is no problem with this aspect rendering. With non-HD programming you will have a tough choice as the Vizio aspect ratio algorithms are not great. The Zoom mode looks decent but stretches content too much verttially. The Stretch mode is not very good with noticeable disproportion in the left and right width of images, especially people.

The Vizio E-series includes Wifi and the Vizio Internet Apps Plus platform. Wifi performance is good, and allows for instant access and plenty of speed for HD content streaming. The 'Plus' in the name means the interface is much more user friendly and the overall performance is faster than before. Some of the most useful apps included are Netflix, Amazon Instant Video, VUDU, MGO, Hulu Plus, YouTube, Pandora, iHeartRadio, and Facebook. There are plenty more too.

Some notable apps included this time around are:

Spotify: This music streaming app gives your Vizio access to just about all the music you'll need. You can search albums, tracks, and artists to create personalized playlists instead of leaving it up to the app to decide what is next. There are ads, but premium subscription models are offered for those who really enjoy the experience.
Lyve: LyveHome gives the TV the ability to compile all of your content from Android, Apple, and Windows devices and access them from one place. Vizio Internet Apps Plus users can easily sort, view, share and their photos and videos right on the big screen.

The Smart TV gets good marks as far as performance goes. There were a few initial hiccups in the set up process, but all was smooth once we got past those and connected to our wifi network. Streaming content loaded up quickly and provided a high quality image over wifi. This is a big plus since not all smart TV platforms handle streaming so well.

This still from House of Cards displays decent picture depth and contrast levels. Getting to the Netflix app only involves a single button press

The Vizio E-series does not include a remote with any special capabilities. No motion control, voice recognition, or QWERTY keyboard. But that's okay. It's a small remote with efficiently laid out small keys that give quick access to the necessary controls. That's really all we need in a remote after all. The buttons to access video streaming apps quickly will be some of the most used.

The small black remote is clearly labeled with plenty of room for the channel and volume buttons. The number buttons may be a little too small for those with bigger hands

The E-series appearance is basic black with a thin frame of around half an inch. The stand is somewhat odd, with two pronged inward leaning support on each end of the TV. A small table top will not accommodate it. The design does not have any sizzle or pop but it looks good enough.

Both the E70 models present a strong value on all fronts for an entry level LED TV. The $1299 is a great deal for a 70” panel of this quality. Strong contrast and picture depth from front and center is the highlight in the picture quality realm. Vizio Internet Apps Plus don't do anything new for the platform, but everything works well and doesn't leave much to be desired. Some downsides are a non-backlit basic non QWERTY remote, 2-point white balance picture settings, and a non-swivel stand. But these aren't deal breakers by any means.