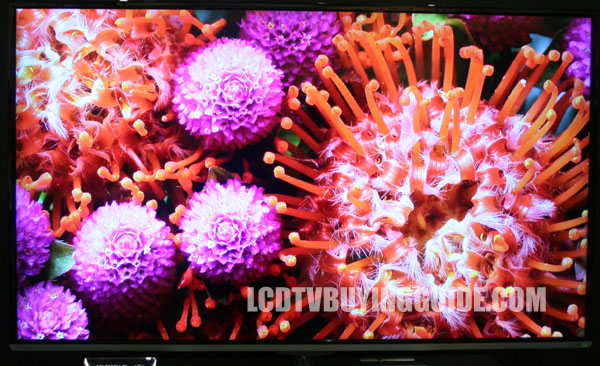 The 58L7350U is the smallest size in the L7350 series. This model is the lowest model in the entire Toshiba lineup that features 3D playback. It uses active 3D technology. The L7350 is also the top tier model if you don't count the 4K L9300 above it. It features the same advanced Cloud TV features as well as picture quality features to get the most out of every image. The 58L7350 is scheduled to be available in March of 2013 and will be available until early 2014.

The L7350 uses active 3D technology and the quality was much better than expected. It's hard to believe I was still impressed even viewing the 4K entry from Toshiba. The benefit of using active 3D over passive 3D is the greater sense of depth in the image. This creates the illusion of elements falling into or popping out of the screen. The active 3D on the 65L7350U sees images popping out of the screen towards us in a great way. Side angle 3D viewing suffered a bit, requiring a more centered viewing angle. Coloration is nice while image edges are not quite as crisp as some TVs we've tested recently.

The 240Hz refresh rate is a spec that sports junkies and gamers will be happy to see on the 58L7350U. Higher refresh rate like this are very good at smoothing out the majority of motion blur and reducing side to side judder. Fast action sports and gaming are going to see the most benefit out of this feature. When the anti-judder feature is enabled it is much less intrusive than features like this we have seen before on different TVs. Most of the time unwanted effects occur in the background that are overly distracting making it a useless feature. On the L7350 it works well, but does not totally get rid of the jerky motions. 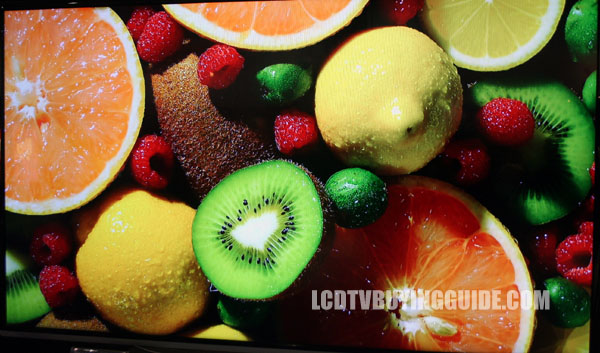 This shot is a great example of the level of detail in bright areas the L7350U is capable of. A noticeable downside is the loss of detail in dark areas. Color rendition is realistic in this picture

Toshiba is making the move to a cloud based smart TV platform on their LED Cloud Series TVs. The cloud services are supposed to create a better and smarter connected experience for users. The goal is to make personalization and the process of finding content highly streamlined. This is done by making it much easier to connect with any type of mobile device you may be using. Toshiba plans to release a companion app to the Cloud TV service that lets users connect with an iOS, Android, or Windows 8 device. Everyone is accounted for here. It's good to see a TV that plays nice with all sorts of mobile devices. This sort of connectivity is important and really hits home the issue of practicality that Toshiba is aiming for. Below is a short list of features to be included with Advanced Cloud TV:

A full QWERTY keyboard is included with Advanced Cloud TVs from Toshiba. This inclusion may be a bit much for those who already have some sort of wireless keyboard, but it will be nice for people who hate typing on a scrunched remote QWERTY keyboard. The keyboard will also make it easier to navigate the smart TV menus, use social networks, and browse the web. We see it as a nice added bonus.

These two features let mobile devices, tablets, and laptops share their screens with the TV. I see it being useful in many situations. It will be a breeze to pop some photos on or play a video on the big screen for guests to enjoy. This feature will also make it easy to watch downloaded TV shows and movies. It's a good addition and we are happy to see a little more useful connectivity in 2013/14 TVs. The features works well with You Tube and allows you to keep searching on your Smart phone while it continues to play. 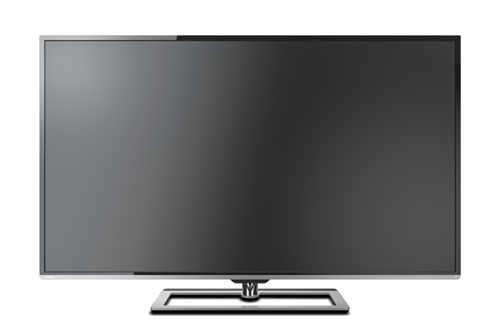 The L7350 has the same gun metal coloration in the stand and frame as the L9300, but it features a different styled stand. The black bezels are just as thin too. They may not be nearly non-existent like some of the top tier LCD/LED models out there, but they are acceptable here. The stand features a similar square frame design like the L9300 series, but the 58L7350U uses only one arm to hold up the display. It's also got a thin metal strip running along the bottom of the display. This is another simple design that gives a very streamlined appearance.

At around $1299 the Toshiba 58L7350U is a great high quality product in this massive and unique 58 inch size range. There is not much competition in this size so 60" or 55" is the best comparison. Compare it to the 60" Samsung UN60F7100 at $1999, or the Samsung UN55F7100 at $1699 and you realize what a great deal this Toshiba offering is even though Toshiba's Smart TV and 3D do not compare well with Samsung's. The picture quality is close enough.