The 32 inch 32C120U replaces the 32C110U. This 720p LCD model is perfect as a second TV for small rooms. It isn't packed with all the latest and greatest features but it provides good picture quality at a solid value.

The 32C120U does not feature LED back lighting, it uses flourescent lighting to save on production costs. It does not produce the same bright whites as LED but it often has more uniform lighting than LED edge lighting. The cost savings from using CCFL to back light the panel allows you as a consumer to get a good picture at a lower price point. 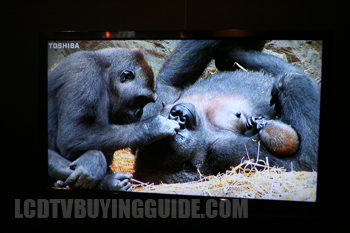 Black levels on the Toshiba 32C120U are satisfactory for a television in this price range. The darkness is inky but it loses detail in low light scenes. Color performance is good, reds are a bit hot but can be dialed back in calibration resulting in a realistic and warm picture.

Like most every flourescent back lit LCD (and even many LED back lit LCDs) the off angle viewing on this television suffers. At angles more than 25-30 degrees off center the contrast starts to degrade and by 50 or more degrees off center the picture becomes washed out. This is not a concern if the viewer is positioned at the center of the screen but in some room configurations it can be something to keep in mind.

A 60Hz panel suffers none of what we have termed "the soap opera effect", an effect where the television can make even the most high budget productions appear as if they with shot with video on a cheap soap opera set. In scenes with slow camera pans you will notice some judder on the 32C120U but on a budget priced television that is to be expected.

It's unusual for a 32” flourescent backlit TV to have such a good input selection. Especially at the very attractive price. The most impressive extra feature in this TV is the USB input which enables photo or video display immediately on the screen. This gives the owner a lot of flexibility.

The digital optical output is also nice to have allowing you to take the audio from the TV to a surround sound system if you happen to be receiving your signal from broadcast directly into the TV.