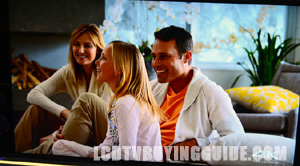 One note about black level depth on the R510C is that they look jet black on the top and bottom bars in a 16:9 format mode when directly viewed front and center. However colors can be a little more washed out on the picture itself due in part to the anti reflective coating on the screen of the R510C. Sometimes dark shadow detail is a bit lacking as the screen filter on this TV causes a hazy appearance with some programming on the screen. One remedy to this problem is turning up the Brightness setting some. This will result in better image definition in dark areas, but a less penetrating black levels and contrast. 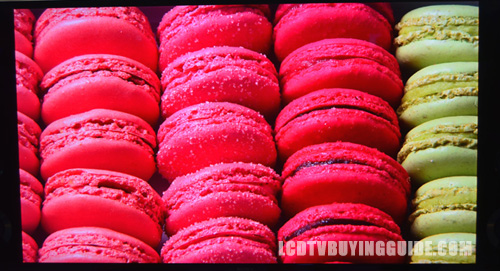 The R510C displays strong color and contrast in this shot

Colors rendition on these new Sony TVs is exceptional and not over-saturated. The fact that the TVs calibrate easily to D6500K speaks to their color accuracy. The backlight is extremely powerful and can overpower color in the R510C so keep it moderated.

The TV calibrated near D6500K even though there is only a 2 point white balance control setting on this TV. The Custom setting is set fairly close to D6500 from the start so you really only need some minor tweaks to get there. There plenty of choices for picture modes to get just the right picture.

Sony generally has great processors in their TVs. The video engines in the R510C does a competent job but we definitely notice significant improvements in the higher end Sony TV lines. The difference results in more motion artifacts in general, less clarity around image edges, and more background noise in the R510C.

The effective Hz rate has been reduced to 120 this year from 240 last year, but the native Hz rate is still 60Hz. The LED Motion feature feature working in conjunction with the 60Hz panel can distort the natural background blur in the picture somewhat in movies or film-based content so use with care. But there is less elimination of background blur due to the lower XR120 rate. The feature is great for sports programming though. Options within the setting are: Clear, Clear Plus, Standard, Smooth, Impulse. We recommend turning it off for movies, and using the Standard or Smooth setting for other programming. 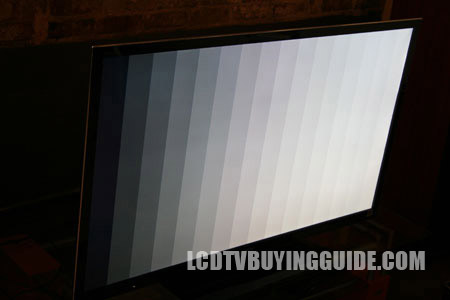 Colors shift and lower contrast occur when viewing at side angles

This gray scale ramp shown from a side viewing angle shows how colors are affected and distorted from the sides of the R510C. Note the additional color added to grays. The result is common among edge lit LED TVs, but shows inaccuracy from off center.

The R510C does not have a Smart TV suite but does have built in Wifi which is capable of accepting streamed HD.

The R510C features (2) 8 watt speakers that can achieve good levels of sound to fill medium sized rooms. They aren't going to pump out entertainment center quality, but they get the job done. There are plenty of presets to get the best out of the source material as well. We really liked having those options. Bass seems to be the biggest problem with these on-board speakers, but that is understandable. We recommend a sound bar or home theater setup for those using this TV as their main living room TV. For other uses the built in speakers will be fine.

Simplicity is one of the appealing aspects of this TV

The R510C has simple, clean lines with around a half inch bezel frame. TV Depth is a respectable 2.6 inches. The stand is a nice compact width and nice design. The TV design looks more expensive than the TV really is.

The KDL-40R510C starts at around $439. What you are mostly paying for is the Sony picture quality, color accuracy and brand reliability. There aren't a lot of extras with this model. The simplicity is one of the appealing aspects for this size TV. The Samsung UN40J5500 is the direct competition for this TV, which the R510C beats in price.