Earlier in the year, Samsung released their massive 85 inch 4K monster of a TV. Now we have the UN65F9000 for those who still want a bigger 4K but don't have the room to fit it's bigger brother. The F9000 series is a slight upgrade on the excellent F8000 series we reviewed earlier this year. The F9000 TVs are blessed with a 4K resolution display and speaker system that provides a bit more kick. All the features like the Smart Touch remote, pop up camera, and the full Smart Hub are still present. Some of the more notable picture quality features are the precision black local dimming, micro dimming ultimate, the ultra clear panel, and the quad core processor for running the Smart Hub. It's a very attractive TV, but the price tag for the improvements over the F8000 series may hold this one back.

Color reproduction, excellent brightness, and a good example or contrast are seen here

Colors can really pop on the 65F9000 although so much of the picture quality depends upon the resolution the content was filmed in. Displaying true 4K content on the screen looks absolutely amazing. HD looks great especially in broadcast and the colors pop accordingly. For lesser signals like a cable HD signal or a BluRay the picture is still very crisp with the inbuilt up-conversion however does not compare to even broadcast HD. You'll want to keep the backlight at a reasonable level. The super strong LEDs on the F9000 can wash the depth of blacks an color if too the setting is too high. From up-converted content color flow is much better than other TVs on the market – one of the reasons this is a premium model. Overall color is very well balanced and saturated and the Movie mode is set very close to D6500K right out of the box. Only top plasma TVs will beat the F9000 in color performance.

With every big tech purchase we ask ourselves, “will something better come out next week or next month.” That is especially the case with televisions. Samsung has addressed this issue in their other smart TVs with the evolution kit. This kit upgrades the internal hardware to bring the TV up to speed with the latest software and performance upgrades. The F9000 is no different, especially since the widespread distribution of 4K content is still on the horizon. The One Connect box is basically the same as the Evolution Kit, but with a focus on 4K distribution and playback standards. The box will be available in 2014 and will also add features, content, and provide performance updates to the F9000. 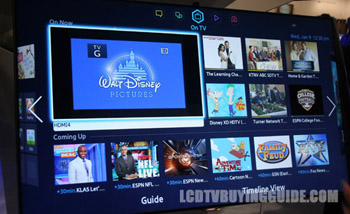 Smart Hub 2.0 is a fairly substantial upgrade to last year's Smart Hub feature. The interface has received a redesign that reminds us of the tiled interface that tablets and smartphones use. This should make it more intuitive and friendly to use for those who are familiar with that sort of navigation. The content is separated into five different pages present you with all the information you need. First is the Apps page that displays recommended and downloaded apps. Then there is the Social page that displays trending content along with tweets and Facebook updates. The On TV page provides an onscreen guide to what is being broadcast live. The Movies and TV Shows page displays what is available from different internet content sources like Netflix, Hulu, Samsung Media Hub, and more. Lastly is the Photos, Videos, and Music page for viewing and watching content from smartphones, tablets, and computers directly or over a network.

The remote for the UN65F9000 has a swipe pad that makes it easy to switch between the main Smart Hub screens. There is also a button to engage the mic, making it simple to access the voice control features

Sound Quality - An Upgrade Over the F8000

With the increased resolution, Samsung decided to pack a little more punch with the speakers on the F8000. There are four speakers total with a combine output wattage of 70 watts. There are two 15 watt speakers and two 20 watt speakers. The result is a full sound that hits the highs and lows without sounding too muddy. Many of the built-in speakers we've tried this year produce a muddled sound that isn't very pleasing. The F8000 before this one was getting there, but the added power on the 65F9000 takes it to the next level.

This is the big question with the new 4K TVs. They have come down rapidly in price to match Sony's early efforts. Imagine that, Sony becoming the low price leader in a great new technology. The world changes. At $4999 maybe this is TV, loaded with features and future-proofed for years to come isnt such a bad deal when you consider the 65F8000 at $3299. A $1700 premium over normal HD, maybe justifiable. The Sony XBR65X900A 65" 4K TV is priced at $5499 from Best Buy so a $500 premium. However, the Sony contains far superior side mounted speakers that do not require a surround sound system to get great sound. But then the remote and Smart TV options from Samsung are better.