The UN55HU8550 4K LED TV from Samsung is their top of the line TV that has the standard flat design. The HU9000 above it gets the curved design and a few more picture quality features. An important thing to note is the flat design keeps the price down. You still get some of the best picture quality from an LED TV, and it's 4K. We have also seen that the differences a curved screen has are very minimal when it comes to viewing angles. All the Smart Hub features like the Smart Touch remote, voice recognition, and Quad Screen multitasking are included. The camera for motion control is an additional purchase. The price for this 55-inch UHD LED TV is $3,000.

This shot is a prime example of the excellent contrast, light flow through, and sharpness of the HU8550

The clear coat, rich black screen and the high quality edge lighting LEDs allow for colors to pop and give a real sense of depth when viewing HD quality source material. The HU9000 above this TV features the Ultra Clear Panel which produces even more brilliant images in 4K. In-picture Light flow, as seen in the above photo, is some of the best we've seen on any TV you will find on the market except. Only OLEDs will do a better job at this currently. Black levels and contrast are two other strong points of picture quality on the UN55HU8550 thanks to UHD Dimming and Precision Black Local Dimming technologies. Blacks are deep even when other areas of the screen are bright. This really helps to reduce halo'ing that happens when there are a lot of dark and light areas on screen. Dark shadow detail is impressive as well.

4K is still in the early stages. Last year we saw 4K TVs released that didn't have HDMI 2.0 built right in. That puts early adopters in a bad postion. They have to rely on the manufacturer to upgrade their TVs. The HU8550 has 4 HDMI 2.0 inputs right on the cabinet ready to accept 4K signals.There is also something called the One Connect box. It is similar to the Samsung Evolution Kit, but with a focus on 4K distribution and playback standards. The box will also add features, content, and provide performance updates to the 55HU8550. This assures that early adopters won't be left behind if things change in the future.

Bright whites and deep blacks, strong depth, and lots of detail are seen in this shot

This is actual hardware local dimming instead of software dimming seen on lower tier Samsung LEDs this year. It makes much more of a positive impact on picture quailty. We felt the image with this feature on was better than off, which is a rare case with features like this. This is due to separating the picture into hundreds of parts and pieces and changing the amount of backlighting from the LEDs. The Precision Black produced inky blacks without losing any dark shadow detail. To find the setting, look for the Smart LED option in the Picture Options menu. It is set to standard by default and we saw no difference when bumping it to high. When turned off, the picture seems to lose the vibrancy it had.

The Smart Hub keeps the same basic design as last year with subtle improvements. Samsung hit the mark with their user interface and intuitive nagivation. This time around you will see a Game tab as one of the major smart TV pages. The Smart Hub also allows for logins so each member of the family can have recommendations tailored to their viewing history. These changes show that Samsung really pays attention to the details when it comes to user experience. Just like last year the Smart Hub is one of the best options for a good smart TV experience. The quad core processor is just icing on the cake.

Surfing the web and the Smart TV features is a breeze with the new touchpad remote. It's much faster and easier than a traditional 5-way controller. The actual touch pad is a bit smaller this year, but that's okay because it now supports motion control. This brings it closer to LG's point and click Magic Remote. The smaller touch pad also leaves room for more useful buttons on the remote instead of the on-screen menus. The voice recognition only works for inputting searches if the soft keyboard for the search field is open. The new split screen feature is another addition that we think is a move in the right direction by Samsung. This makes it easy to view live TV and browse the web or use social media at the same time. A big plus on the HU8550 is the 4 split screen feature. TVs lower in the lineup are only able to handle 2 tasks at once. 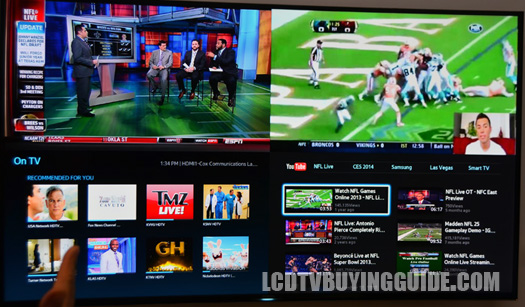 Here you can see the newest and extremely useful faeture of the Samsung Smart Hub, quad split screen multitasking

There is plenty of volume from the speakers on the HU8550 and quality is consistently good though not as rich as some we've tested. Samsung is getting in on the trend of adding small woofers into the cabinets. There are (2) 10 watt woofers and (2) 10 watt speakers here, so you are going to get some decent sound out of this one. Thankfully, there are no hollow or tinny effects in the sound as we've noticed from years past. External sound systems are usually going to be the best way to go, and that still applies to this TV.

Samsung likes to experiment with their top tier models. We really like this year's super minimal design over the wide crescent stand we saw last year. Say goodbye to problems with the size of your TV stand. Samsung calls this silver stand the "T-shape" design. The profile is an impressive 1.4 inches thin and the bezels are only 0.3 inches. This is how a top tier TV should look.

Vlaue is the biggest concern with the new 4K TVs. The good news is, they have come down rapidly in price to match Sony's early efforts. Plus there are more on the market this year, meaning more competition. At $3,000 maybe this is TV, loaded with features and future-proofed for years to come isn't such a bad deal when you consider the Sony XBR-55X850B at the same price. It is about a $1,300 premium over 1080p flat screen Samsung UN55H7150 that has a similar feature set.