The Samsung UN32J6300 is the top of the line 1080p LED TV in the 2015 lineup at this point. Compared to the J6200 series it has the Micro Dimming Pro – a feature normally reserved for much higher priced TVs. The feature is active and increases contrast depending on the scene displayed on the TV. We give the feature a B rating generally as we have sometimes found it to be distracting due to a blinking effect when scenes make drastic changes in light. One feature downgrade from the H6350 series from last year is that the Motion Rate is reduced to 120 on this model from 240 clear motion rate last year. Motion rate is Sasmung's term for enhanced Hz rate effect, created by the LED edge-lit backlight manipulation. It's somewhat surprising to us that this has been reduced. Granted if the TV panel is actually 60Hz rather than 120Hz, at least the Auto Motion Plus feature will not be as distracting. But this lower Hz rate could cause some motion lag during gaming, fast motion movie scenes and sports. 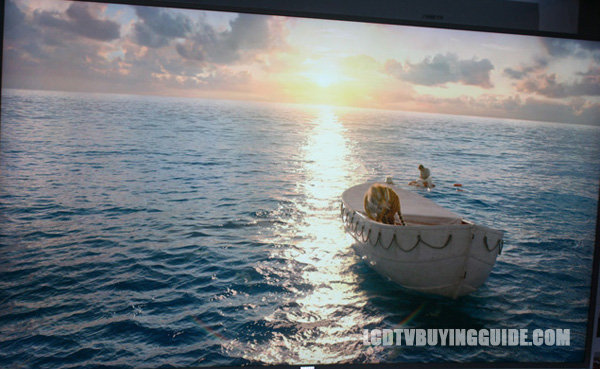 Light flow through is impressive on the J6300

The bright edge LED lighting makes for a brilliant picture and helps to balance out the downsides of the matte screen by providing more rich colors and a good deal of contrast. That said, from relatively close to front and center we felt the picture displayed was very good with lots of light flow-through to help with depth perception. Over time, you are likely to notice some “clouding” or backlight irregularities when displaying very dark or black scenes on the screen. This is more an ill-effect of backlit LED TVs in general than something particular to Samsung. The picture is remarkably similar to the H6350 from last year. The 55J6300 is loaded with tons of extra picture adjustment options, most of which aren't terribly useful and are better off left unused.

This shot really highlights the color, contrast, and clarity of detail from the display

The biggest problem with this TVs picture quality is the common curse of LED backlit LCD TVs. Color and contrast degrade pretty early at about 20 degrees off center and it quickly gets worse from there. The amount of “wash out” is also more severe than LED TVs with a clearer coat. Above and below off center viewing gave a similar result. This is important for those who plan on wall mounting the TV above eye level. Or for those with wide angles in their viewing room.

The Auto Motion Plus picture setting in the J6300 is a feature that comes as a blessing and a curse. The effects of the feature are somewhat tamed by the 120 Motion Rate downgrade on the TV. By default the feature is set to On in all of the preset picture setting modes. You should turn it off for streaming content, DVDs, Blu-rays, and TV shows. Otherwise, you end up with the dreaded soap opera effect, making images look terribly unrealistic by eliminating natural background blur. Turn it off in the Picture Options menu and everything will be fine again. You'll immediately see judder when you disable it, but your eyes will adjust momentarily. We've noticed that it actually helps when it comes to displaying 3D content and sports programming. However, the J6300 does not display 3D content so no help there. When viewing 480i based content we saw slight improvements when using the feature on one of the lower setting options. Just be familiar with how to adjust this and it won't be a problem. 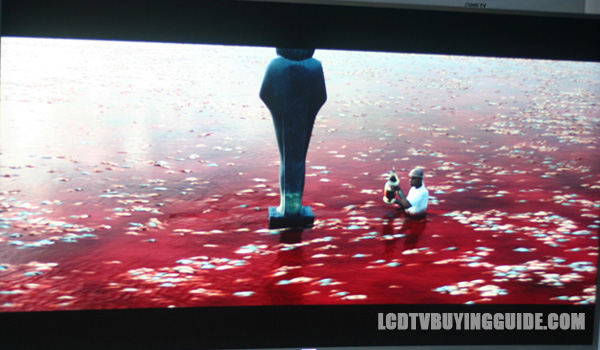 Once again, take note of the excellent color reproduction and strong contrast

Game Mode - the Way to go for Gaming

Enabling the Game Mode for gaming is a must for competitive shooters and action gamers. The input lag is noticeably reduced. That really makes games like Battlefield and Call of Duty much more enjoyable and immersive. Game Mode features its own picture settings, so take a moment to callibrate the picture settings and get them looking good again the first time you do it. Screen Fit is also one of the most important things to select so you don't get overscan. A lot of the picture settings for games will be determined by personal preference. Just be sure the picture is bright enough for you. If not, turn the backlight setting up.

Samsung has cut down on the number of Apps in the Smart Hub, many are still buggy. Let's face it though, you probably are only going to use the most widely used ones anyway. Believe it or not, when it comes to quality of free and paid apps, they beat out most of the competition. The Premium Apps such as the movie services, sports and music are also top notch and include the usual Netflix, You Tube (though we like Youtube through the browser better), Facebook (browser is better here too), Twitter, Vudu, Amazon, Hulu Plus. All of this and the web browser are powered by a quad core processor for increased speed.

The built-in wifi connected to our network flawlessly and quickly. We had everything up and running in no time at all. The Web Browser on the J5500 defaults to a Bing search bar. The browser is slow to use with the 5-way controller on the remote but loads content quickly and the Wifi connectivity is just as strong as last year's model.

Samsung has realized that more power under the hood isn't a bad thing. The J6300 doesn't even have the 4x split screen seen on the higher models. A quad core processor means that TV bootup time, app loading, and app performance are much speedier than before. A very welcome inclusion.

I like the looks of the stand on the J6300 better than the late quadrapod stand from last year. Samsung states that it's a v-shaped design. To me, it looks more T-shaped. Either way, it's a nice looking design. The framing bezel is adequately slim at around a half an inch and the TV is 2.5” in depth for a nice slim profile look.

The UN32J6300 sells for around $499. It's a bit on the pricey side for a 32” screen size,but has a few enhanced picture feature which you normally would not find on a 32” screen like the micro dimming pro feature. In the 32” size range it's a high end TV, but generally, the middle range Samsung, LG and Sony products are better than the competition, and that's the case with the J6300 as well.