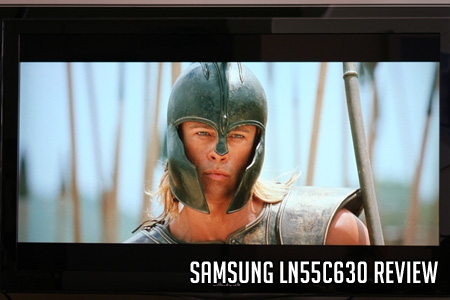 The 55C630 presents a clear, bright and ready for battle shot from the Blu Ray of Troy.

Samsung announced anothr CFL backlit line of LCD televisions at CES 2010, the C650 series of LCDs feature Samsung's 1080p, 120Hz "Ultra Clear" panel. In the 2009 6 series we were impressed with a number of features but didn't care for the effect the AutoMotion Plus 120Hz processing had on film, DVD and broadcast content other than sports programming.

The popular red Touch of Color bezel returns for 2010 on the C630 line and while the C630 doesn't share the sleek, metallic designs of the LED line up it's still a good looking television. 4 HDMI inputs, 2 USB ports and multiple analog inputs let you connect all your devices. The C630 does not share the internet connectivity features of the C650 series but other than that they are essentially the same TV. 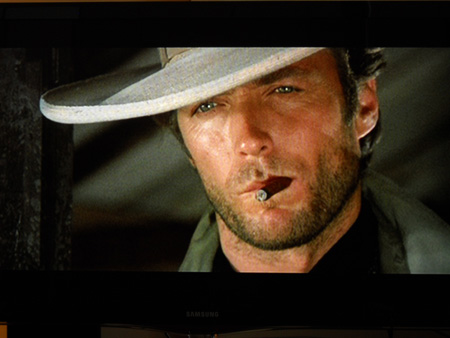 Great definition in Eastwood's face from standard definition DVD of Good, Bad, and The Ugly.

At $1499 this 55" LCD TV is a super deal. Sure, you will not boast LED backlighting (no big deal), or 3D compatibility (also no big deal yet), or the highest 240Hz rate (probably not even noticeable from the 120Hz), or Internet options from Sasmung Apps. But what you will get is a great picture with the most practically interesting features, fantastic black levels and depth and super brightness if needed from time tested technologies. Competition comes from the LG 55LD520 and the Sony KDL-55EX500 LCD. I'll just make the comment right here that this TV will give any edge lit LED LCD a tough run for the money. One considering this TV should also consider plasma TV in this size such as the Panasonic TC-P54G25 which sells for around the same price.