An Excellent TV by Purenv

Pros: The TV is thin and has good audio which is hard to find these days. No frills TV with a great picture at a great value.

Cons: none so far

Summary: Good audio meaning: great for watching normal tv shows, not to watch movies like a home theater. But that is to be expected. The speakers are perfect and loud if, the TV is mounted on it's stand on a TV stand so the thin speakers have something to reflect the sound off of. If you mount it on the wall the audio volume will not be as loud. 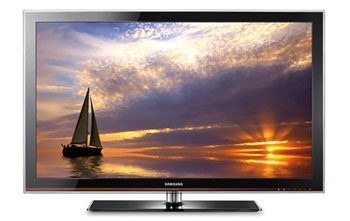 This item arrived in good shape via FedEx, although the box had a few tears, scuff marks, and a large puncture--fortunately not in front or behind the the LCD panel!

With minimal adjustments, I've been able to obtain an amazing picture with good colors, brightness, and contrast. This set will automatically adjust screen brightness according to lighting in your room, which I found resulted at times in a picture too dim or somewhat "washed out." However,this is easily corrected by turning off the energy savings and eco sensor settings under "Eco Solution" in Menu. I, also, found that a one-notch adjustment to dynamic contrast and black tones, produced a more vibrant image with sufficient shadow details. Just take care that you don't ramp up too high on settings such as brightness, backlight, and contrast unless you want to lessen the life-expectancy of the CCFL backlight bulbs

On-board sound system is acceptable, although I prefer my external hookup. "Auto-volume" is really nice, because it keeps sound levels more constant and no need to hit the "mute" button on the remote when loud TV commercials come along.

I just bought this, b/c my 2 yr old Panasonic Plasma died. The HD movie channels on this one appeared as if they were in 3D, which isn't possible with this tv. Movies, and some normal channels appeared like the original film, or raw film. My wife called it "soap opera" tv. It's hard to describe, but really weird and awful to watch. Nobody had any idea what I was talking about!

The review below by bigcstyle describes it perfectly and told me how to fix it-I was literally 1 hour away from returning. It's the Auto Motion Plus setting. Go to Picture settings and turn off Auto Motion Plus. Voila, normal television again. Thanks bigcstyle!

Oh, by the way, the guys at HH Gregg had no idea, thought I was an idiot and blamed my cable provider. Uverse came to the house today, couldn't figure it out, but narrowed it down to the tv. I only bought at HH Gregg b/c my Panasonic was from Best Buy, they didn't care about it, thought I would try elsewhere, but HH Gregg salesman are not professional-I am being polite.

How do I now like the tv? I really like it. The 120 Hz produces some blur in action or sports, not as smooth at all as the Plasma. However, it's a very clean and crisp picture. For $800.00, I am happy, now that I figured out the Auto Motion Plus. I recommend the tv.

Everything we had hoped for and more. Easy installation Sharp picture Is significantly better than the Samsung DLP it replaced. All the things we were looking for 1080p USB ports HDMI 120Hz Would highly recommend