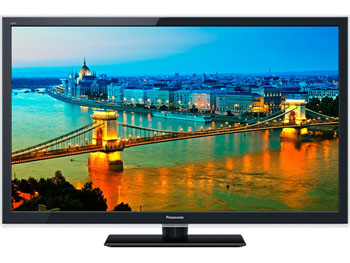 In 2012 Panasonic is expanding in larger sizes and more robust feature sets for their LCD & LED televisions. The ET5 series is an upper mid-tier model with active 3D, a 120Hz 1080p panel and Panasonic's Viera Cast online feature.

In addition to offering larger sizes and more features in their LED TVs, Panasonic has also improved the picture quality in them. The ET5 series has strong contrast that produces inky black levels that make colors pop off the screen. The 120Hz panel also features a scanning backlight that produces an effective 360Hz to smooth out fast motion and active Full HD 3D for high detail with 3D content.

360 Back Light Scanning is what Panasonic calls the technology they use to emulate a 360Hz panel. The panel itself is 120Hz and then the backlight is manipulated to create the 360Hz effect. Other manufaturers often display this as the actual Hz rate of the television so we commend Panasonic on using a more transparent term to describe the technology. The 360 Back Light Scanningin the TC-L47ET5 is used to reduce judder in film content and eliminate motion blur in fast action.

All US televisions have a base frame rate of 30 or 60 frames per second but film is shot at 24 frames per second. 24 does not go evenly into 30 or 60 so the television's processor has to convert the content to display on the screen. This is what causes judder and jerkiness with film content on some televisions. In the ET5 the 24p Cinema Smoother interpolates extra frames into the content to smooth out 24p content and eliminate jerkiness.

The TC-L47ET5 has the new Panasonic Easy 3D Technology which is a big surprise and departure from their previous all-active shutter 3D lineup. This will keep the costs and price of this model and series very competitive with LG active 3D models. Though the resolution is only half of that with the full HD 3D that Panasonic and other manufacturers produce, it nonetheless has a good enveloping 3D picture though not quite as deep and colorful as the active 3D plasma TVs from Panasonic. As well, it is not quite as smooth. But we did not note any negative crosstalk or flickering issues and the very light glasses are super comfy. With lots of pairs passive 3D glasses thrown into the deal (we think 6) it might be the right choice for those that plan to do some 3D viewing with a large family.

The ET5 has a 1" matte black bezel surround the glossy black screen and about a half inch of clear acrylic surrounding the bezel. It is a good looking television if not a standout aesthetically.

Along with a full web browser that is new for the 2012, the ET5 comes equipped with the full Viera Cast Internet TV suite. It features access to streaming video apps from Hulu and Youtube, social networking like Twitter and Facebook, online radio from Pandora and more.

With the Viera Remote app you can control the TC-L47ET5 with a smartphone or tablet. It supports use of the touch screen on your phone and the phone's built-in keyboard as well as displaying web pages and video from the TV to phone and vice versa.