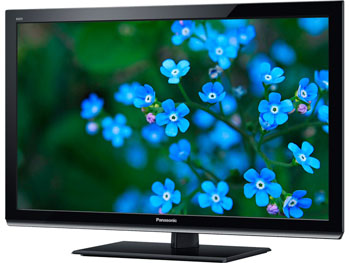 Picture Gallery
The X5 series from Panasonic are a line of small LED TVs that are perfect as bed room or dorm room televisions. The TC-L32X5 is a 720p, 60Hz LCD panel with LED back lighting.

Picture quality in Panasonic LCD and LED televisions is improved in 2012. The TC-L32X5 doesn't have many of the picture features form higher end models but black level, contrast and color is all improved over older Panasonic models.

The 32" TC-L32X5 is 720p resolution, this isn't really an issue in a smaller TV as most content is still broadcast in 720p or 1080i so you won't be missing out on detail there. Most video games are also 720p and lower so the native resolution won't set you back there, however, we do not recommend using a 720p television as a computer monitor except in very small sizes.

The X5 has a game mode that bypasses the picture processing to cut out input delay when playing games on the TV. Input delay is when a gamer presses a button or stick on the gamepad and because the image is fed through the the television's processor the action appears on the TV screen with a noticeable delay. This game have a damaging effect on gameplay so gamers need a TV with a bypass mode like this.

The X5 retains the look of last year's Panasonic LCD televisions with a fairly wide, glosst black bezel with some metal and acryllic accents. It is not a head turner but it isn't a bad looking TV either.