We decided to do a side by side comparison review of these two intruiging offerings which can both be found for sale currently at Costco Wholesale Club. We reviewed the LED TVs with the same signal sources through the same inputs both post calibration. Our findings are mostly just fact but we've added some of our own thoughts and impressions as well. Both TVs are Spring 2010 models arriving now with similar feature sets including Hz rate upgrade to 120Hz or 240Hz, LED back lighting, and various other similarities. We highlight where the features and quality vary. Keep in mind what features are most important to you in using this guide to help you choose a TV manufacturer winner.

This brightly lit computer generated image from the Blu Ray version of The Fifth Element displays in rich detail on both TVs.

Calibration: Both TVs calibrated relatively easy to D6500K. Turning the brightness or contrast up on the Vizio XVT will cause color shift. Gamma was nearly perfect right out of the box on the Sony EX.
Advantage: Sony 46EX700

HQV Processor Testing: The internal chip set video processors performed much better in most testing in the Vizio XVT472SV. Panning was smoother and there were no moire' patterns developing in stadium seating testing. Film resolution testing was also far superior.
Advantage: Vizio XVT472SV

480i Video Content (cable, DVD): Color rendition tested about the same on both TVs. The Vizio XVT472SV displayed blurred edges in most programming, and was considerably darker. The Sony EX series was excellent in dark shadow detail.
Advantage Sony 46EX700

HD Picture Quality: Again the presentation from the Vizio appeared overly dark in dark content scenes. There was jerky panning side to side with Smooth Motion 240Hz feature turned off. The Sony EX series major weakness was quickly degrading contrast levels at side angles. However, image edges were crisp and clean and the TV does a good job with 3-dimensional effect.
Advantage Sony 46EX700

Another scene from The Fifth Element the Vizio XVT472SV struggles to maintain post calibration brightness compared to the Sony.

Black Level/Contrast Ratio: Black levels both tested better in our contrast ratio testing and looked better with content on the Sony 46EX600. The Vizio's black levels were decent but can look a bit washed out with certain content.
Advantage Sony 46EX700

Dark Shadow Detail: This is perhaps the toughest issue for the XVT472SV as it struggles to maintain detail in dark scenes from a post calibrated picture setting – especially in the top left and right corners of the screen. The Sony 46EX700 displayed excellent shadow detail in dark scenes and this area was the most striking difference between the two TVs.
Advantage Sony 46EX700

Note the dark shadow detail in Mark Walberg's shirt from both TVs in this scene from the Blu Ray version of The Departed. Shadow detail was a particular strength of the Sony and weakness of the Vizio.

Color Rendition/Color Accuracy: Neither TV displayed oversaturated colors when calibrated. The Sony tends to display some blue tones in a more purple hue. Overall the contest was even.
Even

Color rendition was close on both TVs. Here colors displayed a little more vibrant and with better contrast on the Sony 46EX700.

Viewing Angle/Off Axis Viewing: This was an area of weakness for the Sony 46EX700 as contrast begins to degrade quickly at 15 to 20 degrees. Due to the local dimming LED back lighting in the Vizio this was an easy win.
Advantage Vizio XVT472SV

LED Back Light Evaluation: The Vizio XVT472SV has local dimming controlled LED back lighting which can be a feature enhancement. When testing with a static lit gray screen there was obvious displayed lighting irregularities around the side edges of the screen in a rounded arc formation. In the Sony 46EX700 has edge lit LED back lighting and there was prevalent side to side light blooming in areas. Both of these scenarios will cause some color error and bloom effect.
Even

False Contouring/ Mapping: Due to excellent internal processor chip set there was no mapping, grouping, banding or the like apparent in the Vizio XVT472SV. During HQV testing we noted some banding and mapping in moire' pattern testing with the Sony.
Advantage Vizio

120Hz/240/480Hz Rate Feature Evaluation: Vizio calls their back light manipulated 240Hz rate feature Smooth Motion and claims that the manipulation creates the effect of 480Hz.. Sony calls their 120Hz rate feature MotionFlow and makes no such claims about the backlighting. Vizio's SmoothMotion works better when panning side to side (it is indeed smooth) and we must derive with fast motion as well. The problem is that with most content the feature eliminates natural intended background blur thus making it undesirable for most programming. Without the feature of course there is visible judder and jerky effect when panning side to side.

In the Sony 46EX700 the opposite holds true. MotionFlow feature does not introduce unwelcome effects and may be used with all programming, but it does not work as effectively at eliminating jerky effects with side to side panning and other annoyances.
Even

Inputs: The Sony 46EX700 has all inputs you would presently need or want. The Vizio XVT472SV lacks an Ethernet port for Internet.
Advantage Sony 46EX700

Aesthetic Considerations: Though the XVT472SV has a thinner bezel framing of just an inch which we like but is a hefty 4.5" deep. The table top stand does not swivel. The Sony 46EX700 is just over 2" in depth and comes with a swivel table top stand. The only drawback being a slightly wider bezel.
Advantage Sony 46EX700 (just barely) 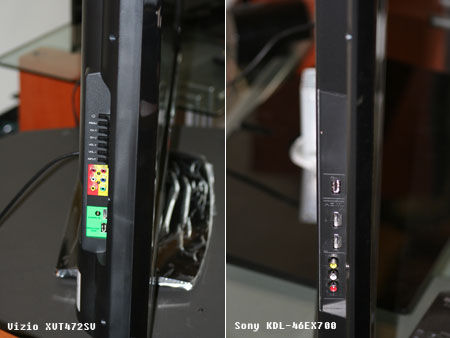 Remote Control/Menu Funtionality: Neither remote control is backlit. The Vizio remote's top control buttons are too small, the Sony's very large but the remote is plain basic looking.
Even 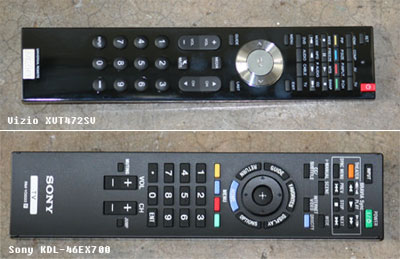 Internet Options: The XVT472SV does not contain Internet options. Sony wins this contest with a fight.
Advantage Sony 46EX700