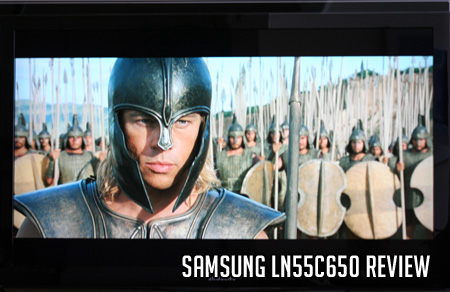 The C650 series from Samsung contains some older upgrade technology features such as CFL backlighting, 3.4" depth, Touch of Color bezel, 120Hz Auto Motion plus and the ultra clear panel. This model falls in the lower to mid range of Samsung's LCD/LED lineup. We thoroughly enjoyed last years B650 series LCD so were happy to review the successor model. And as anticipated, we were very pleased with the results. We hope that Samsung will continue to offer/produce a value oriented CFL backlit LCD TV as their technology contained in these TVs offer exceptional value combined with excellent quality.

Calibration: The 55C650 was very calibration friendly without going into the service menu. In fact, from the movie mode setting, there were only minor tweaks needed here and there to close in on D6500K. There is an ample array of calibration controls including white balance and noise reduction. The standard setting continues to have a major blue push. The Movie setting allows adjustment of all picture setting options and brings the picture to life.

This LCD TV has a tremendous CFL backlight. We needed only set the backlight at 7 from the 1 – 20 scale to achieve a desirable picture in a darkly lit room. The backlight strength could come in handy. Use it to control viewing in bright to dark rooms rather than change the contrast or brightness controls.

Processor Testing: The internal processing chip sets for the C650 series LCDs are stout. Edges from test material are clear and crisp with both 480i and 1080i material. Transitions are extremely smooth, even from side to side panning or fast moving objects. 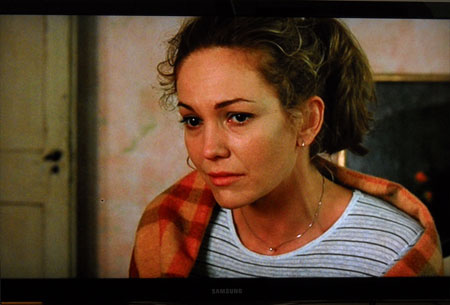 The 55C650 can bring interesting defined images to life from any signal source. Here with a 480i DVD from Under the Tuscan Sun.

Up conversion from 480i and 480p: In the past we have harped on the importance of the AutoMotion Plus 120Hz technology contained in this and most all of Samsung's LCD and LED TV offerings. The importance of the performance of this feature cannot be overstated. In the 2009 series B650 series we recommended turning off the 120Hz feature for all but sports programming due to the unpleasant side effects produced when the feature eliminates the natural background blur of the picture. We were very pleased to find that this feature is much improved since last year. Rather than eliminate the natural background blur, the feature now dramatically enhances foreground objects. While this may be distracting to some purists, I found the improvement compelling and amplifying in most instances – especially with 480i DVD and broadcast programming. The feature does a nice job of presenting a lively image that involves you more in the content. There are side effects. . There is a Matrix-like "glitch" effect that occasionally occurs when the feature is on. However, with the feature off we noted very significant motion lag and judder effect in 480i content. On is better in most cases. We compromised by tuning the Automotion 120Hz feature to the custom setting and keeping the Motion Blur portion at level 10 while keeping the judder reduction part at level 2. This helps keep some of the unpleasant kitchy cardboard soap opera appearance at a manageable level. There will be some judder effects with this calibration, but not overwhelming. 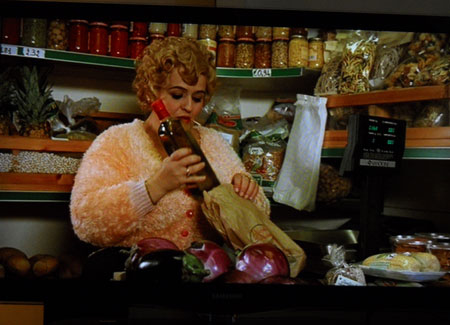 An image from the same movie shows the TVs excellent contrast and color detail.

The processing in this TV is so strong that we recommend not using an upconverting DVD player in order not to conflict with the up conversion and processing from the TVs internal video boards. In many cases we felt the upconversion processing really brought some life to 480i DVDs and broadcast.

Black levels appear very deep and rich even with 480i DVD and broadcast content. There is very good light flow through the picture which allows for lots of detail even in dark scenes. It's almost as if there is a magnifying glass overlaying the screen. And surprisingly, side viewing are solid even with 480i content without degradation of blacks and contrast.

720p/1080i/1080p Picture Quality: Black levels are awesome as is contrast and brightness. Images are crisp and the detail is amazing with HD sources. Here's the big dilemna with HD content; whether to use the 120Hz AutoMotion feature or turn it off. It is not really needed. HD Blu Rays and Broadcast material are already very clear – and the feature can introduce some unwanted kitchy side effects with the background material – even though much improved from last year. I recommend turning it off for most HD content, though there will be some occasional judder effects. I would use it for animated HD content, sports programming HD content, or other HD content that has lots of fast motion. Other than that I would turn it off (see how below in features section). 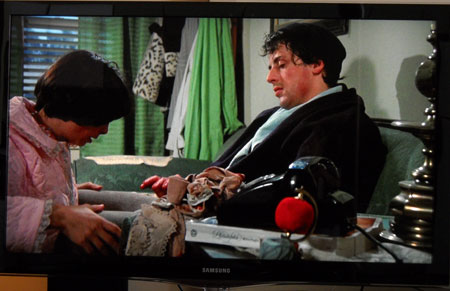 After turning off the 120Hz feature, high definition content appears vibrant, realistic and extremely crisp. Blacks are rich for an LCD and contrast is a strength. One of the highlight features of the LN55C650 is its picture depth perception. Samsung has been unparalled in this area lately. I believe this is due to the companies Ultra Clear Panel technology which does allow for some glare on the screen but the tradeoff with great depth and rich colors is a winner.

Black Level/Contrast/Contrast Ratio: Black Levels on the C650 series LCD HDTV is super saturated, as black as the glossy black bezel surrounding the screen. We measured post calibration ANSI contrast at an unbelievable 5408:1 with the backlight at 7. We believe contrast is enhanced by the Ultra Clear Panel that Samsung uses for this LCD TV. The TV can get extremely bright and has exceptional range. Contrast appears superb on this TV, and we don't say that about many – especially not LCD TVs.

False Contouring/ Mapping: While false contouring or mapping groups of colors was not signifacantly noted, we did notice the below grain effect which could be confused with false contouring.

Exceptions: There is a vertical grain effect (best seen against a white or light background of a moving image) present on this TV. It almost looks like there might be a piece of plastic protective film still on the screen (we checked, there wasn't). We noted the effect was still worse on the C550 series plasma TV. We suspect that this is a result from the Ultra Clear Panel technology that also delivers the great depth perception, and extraordinary side angle viewing capability. While this overlay grain effect is certainly present, the trade off is beneficial overall.

Features: Read above in the Picture section for a run down on how the 120Hz AutoMotion Plus feature performs. Here's how to turn it off and on:

Next up the B650 LCD series has an Internet widget feature with Yahoo!, Flicker, You Tube, and others. It's one of those features that you will scroll through and glance at once and never use again. The options are currently unappealing, but it's nice to have the LAN connection for future proofing. The B650 series is DLNA compliant which allows various devices in the DLNA network to communicate with one another.

Internet Options: There is an array of Internet options, some proprietary. Samsung has increased the options. The Youtube option was pretty good. We found the Yahoo! Widgets in finance and weather pretty weak and non-worthy. Some other options are Panadora, Vudu, Blockbuster, Netflix, USA today AP new ticker. 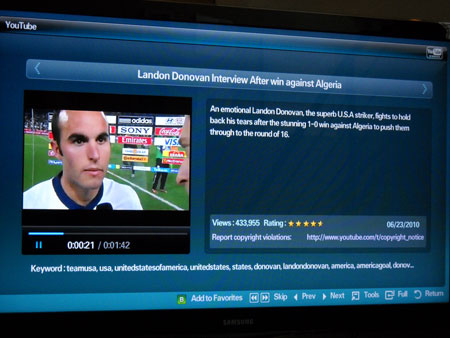 Landon Donovan on Youtube after the US win via the Youtube Internet option the C650 series LCD TV.

Yahoo! Weather widget appears to the left of your viewed content and useful features such as Blockbuster or Netflix options are included

Aesthetic Considerations: The C650 has lots of looks. The 55C650 is 3.4" deep while the smaller units are 3.2" deep. A nice wall mount or table top depth (without having to pay up for the super thin TVs). The framing bezel is a nice width about 2". It's black with a plexiglass overlay that goes just past the edges to give the appearance of glass. I like the effect. Under the center bottom frame there is a unique wide V shape and subtle silver gray and red Touch of Color. A nice little accent to a design that might be slightly boring with it. The sturdy swiveling table top stand must weight 12 pounds. It has an attractive glass surface with a clear neck. The stands allow for about 20 degrees of swivel. 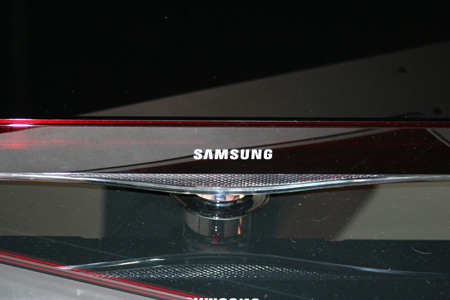 Remote Control/Menu Funtionality: The C650 series LCD has a nice easy to navigate menu system with transparent headings. Thankfully, Samsung got rid of the scrolling navigation wheel on the remote control, opting instead for simpler arrow keys. The remote is straightforward with almost all keys being backlit if necessary. Another improvement on is the matte black finish rather than the sticky gloss finish which showed fingerprints. There is a dedicated Yahoo! Widget button added. The source button controls input selection. The p. size button controls aspect ratio.

Audio Output:There is plenty of volume capacity on this TV from the powerful, dual 15 watt speakers. The C650 is plenty loud in large room at just 30% of total. We were not as impressed with the quality of the volume as voice seemed weaker than background noise and there was a hollow, tinny effect in many instances.

At $1750 this 55" LCD TV is a fantastic deal. Sure, you will not boast LED backlighting (no big deal), or 3D compatibility (also no big deal yet), or the highest 240Hz rate (probably not even noticeable from the 120Hz). But what you will get is a great picture with the most practically interesting features, fantastic black levels and depth and super brightness if needed from time tested technologies. Competition comes from the LG 55LD520 and the Sony KDL-55EX500 LCD. I'll just make the comment right here that this TV will give any edge lit LED LCD a tough run for the money. One considering this TV should also consider plasma TV in this size such as the Panasonic TC-P54G25 which sells for around the same price.