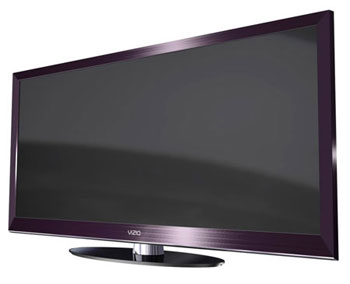 New for 2010 Vizio introduces the XVTPRO series of LED TVs. This model is equipped with local dimming LED backlights and 480Hz picture processing. The 480Hz frame rate is actually a "backlight manipulated" 240Hz conversion. This means that the TV is strictly 240Hz but with manipulating of the backlight Vizio claims that they can present an "effective 480Hz."

Local dimming LED backlighting is a feature for which we are very fond. It enables better black levels, viewing angles, and better color reproduction, not to mention better contrast. If they do it right, this feature could really help Vizio's status in the picture delivery department.

The 240Hz to 480Hz conversion on the other hand is a feature we have reservations about. It can introduce lots of extaneous material into the picture by eliminating the natural background blur. As well, we believe the claim to 480Hz is simply a marketing gimmick to try to seperate themselves from the other 240Hz TVs. Certainly overall we appreciate the efforts to eliminate the motion lag and blur that often accompanies LCD TVs. That's what this feature is there to accomplish. However, it is sometimes much more effective than others and just calling it 480Hz doesnt make it so.

Vizio claims that the proprietary Smart Dimming technology controls hundreds of individual LED zones to provide greater contrast and color management than regular LCD or edge-lit LED panels. Also added to these new Vizio TVs is wireless HDMI which purportedly allows the TV to receive full high definition video and audio without an HDMI cable. This will be an interesting feature to test for resolution and clarity. 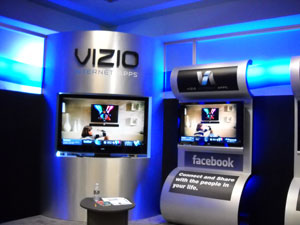 The XVTPRO550SV is 3D compatible using HD3D and Sensio 3D technology (shutter 3D glasses sold separately) and contains connectivity via Vizio's own internet apps. A full QWERTY keyboard on the bluetooth remote will make entering data into these apps easier. Using bluetooth for the remote can be a headache for universal remote users however.

Vizio is claiming a 10 million to 1 "Mega Dynamic" contrast ratio on the XVTPRO series and 1.7 billion colors when it comes to color depth. This high end LED TV from Vizio should be available around August 2010 and we are looking forward to reviewing this new model.