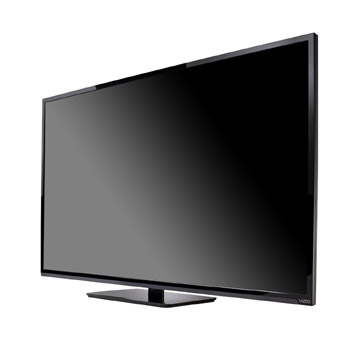 This entry level LED from Vizio features their Theater passive 3D playback over the other E551 models in the lineup. The Vizio Internet Apps are still available in full force, so there shouldn't be any worry about getting content on the screen. It's got a slim profile and thin bezels for a sleek look. Some other features include a 120Hz refresh rate and Razor LED backlights with Smart Dimming. It is a bit more expensive than the non-3D version, but only marginally so.

The E551d-A0 is part of the Razor LED lineup because of the edge-lit backlighting. The backlights produce plenty of light to make for a bright screen with good contrast. It's not the best we've seen, but for the money it's a great deal. Viewing angles are not superior, but that is always a problem with LED backlit televisions. On to nearly off center viewing is going to produce the best results overall.

Theater 3D is the name for Vizio's passive 3D. This means the glasses are lighter and aren't powered by batteries. It also means the side angle viewing for 3D will be alright, the picture should be plenty bright, and flicker should be minimal. On the down side, a full HD image will not be sent to each eye. We have seen some pretty good passive 3D in the past and it keeps getting better, so this isn't a fault of the E551d at all. 2 pairs of 3D glasses are included with the TV.

The Vizio E551d-A0 takes full advantage of the Vizio Internet Apps (V.I.A.) with the built in wifi connectivity. You'll find that Vizio's smart TV platform gets you to all of the apps you are really going to need on the TV. There are more than enough apps for streaming video content, so you should never be without a show to watch. All the premium venues like Netflix, Amazon Instant Video, Vudu, Hulu Plus, and Youtube are available. Don't forget about your favorite social networks or news venues either. They are accounted for. There is no voice control, motion control, or special connectivity, but that keeps this TV value oriented. This can be considered a good thing because many of those features are still being perfected and don't add enough value.

The E551d features plenty of connections for perfecting your home theater. First of all, there are 4 HDMI inputs. That is plenty for even the most gadget crowded entertainment center. There is one shared component/composite input, one Ethernet port, one USB port, and one digital audio out. Vizio realizes that most people really need the HDMIs and delivered on that front.

The Razor LED design give it a super slim appearance with a metal frame and stand to boot. Vizio has also slimmed the bezel around the picture so you get more picture for the actual physical size of the TV. This design brings Vizio's TVs an updated appearace that will shine in every living room.