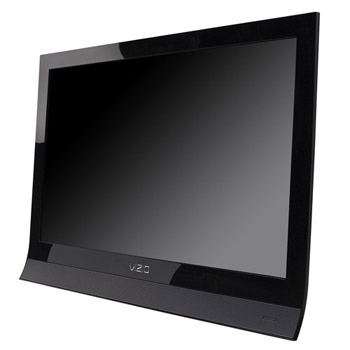 Vizio's E Series is the entry level line of Razor LED edge lit LCD televisions. These sets come in a wide variety of sizes and trim levels. The newest models in the E series have significantly reduced the trim size, making them very attractive TVs. They lack some of the features of the higher end models, like internet connectivity and higher refresh rates, but they have the same thin, modern design as the other Razor LED TVs.

The E191VA has a 60Hz LCD panel with edge lit LED features. The high refresh rates and local dimming zones of the M and XVT series were left out but it does have the better brightness and contrast associated with LED back lighting.

For the last couple years Vizio has produced some pretty good looking TVs, 2012 remains no exception. The LED edge lighting makes the TVs extremely thin and the gloss black bezel looks nice though it won't stand out in a line up of LED TVs.

the E191VA extremely slim because of the Razor LED Lighting features.