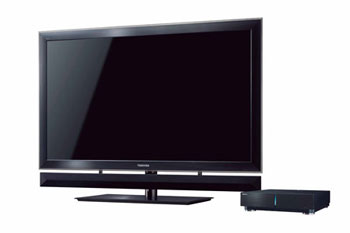 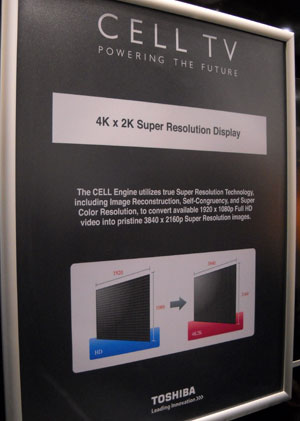 Toshiba introduced it's new Cell TV at CES 2010, using the same cell processor found in Sony's Playstation 3 game console Toshiba promises a vast feature set and impressive picture performance in this line of local dimming LED backlit LCD televisions. The KIRA2 panel boasts a 9,000,000:1 dynamic contrast ratio, 1,000 cd/m2 brightness, 512 controllable zones in the backlighting and 3D capability. 480Hz processing should allow more lines of resolution to be sent to each eye when viewing 3D than a 240Hz or 120Hz TV can provides and Toshiba's TriVector 2D to 3D Conversion promises to let you watch any content in 3D. Since creating a 3D image involves special post processing and camera work we're a little sceptical of these 2D to 3D conversion claims but we are anxious to review the Cell TVs to see it in action.

At Toshiba's impressive all black display at CES 2010, we got an up close view of the new cell TV picture with varying scenes in comparisons to the 2009 model. There was obviously more processing power apparent, and contrast seemed better. In a night scenes with neighborhoods lights, the lighting was visibly brighter on the X900. As well, the picture had sharper edges and was much tighter in almost all scene examples. The drawback was a dithering noise that ruminated in almost all of the display sample material. This was apparently caused by the strong processor, but it yields an unpleasant side effect.

The Cell TVs house their built in 1 terrabyte hard drive and built-in BD player in a set top box that connects to the display via Wireless HD, it's always nice to have less cables going to the TV but you'll still have to run power cable to hang it on the wall. Other connectivity options are an ethernet port or 802.11n WiFi. These will allow you to connect to Net TV, Toshiba's internet on the television service. Net TV partners with Netflix, VUDU, CinemaNow and more to provide streaming content as well as video calling and conferencing and the Cell's Net Resolution+ is there to clean up low resolution internet video.

The cell TV is a two piece system with the set top box and comes is a design package Toshiba is calling "Genesis" that features a brushed black aluminum bezel and black acrylic trim.