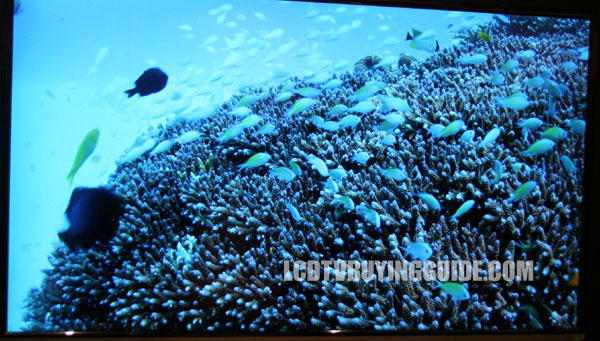 The 50L4300U seems to be a direct replacement of the L5200U from last year. It has a similar picture quality features like refresh rate and screen resolution, but the L4300U incorporates Toshiba's new Cloud TV features. Cloud TV allows for greater connectivity and personalization for each user. This smart TV platform aims to really increase the value of the TV by making it usable with all type of mobile devices. The 50L4300U is a step down from the L7300U that features a 240Hz screen and more streamlined design.

The bright LED edge lighting is a plus on this mid level TV and provides an overall positive effect to the picture quality. I notices brilliant peak whites and bright whites. This is an inherent advantage in that type of back lighting, but it also has its fair share of draw backs. The distribution of light across the surface of the screen has a tendency to be uneven. This results in screen uniformity issues. Most of the time this can be settled with a backlight adjustment. Contrast doesn't seem to be as strong as some other LED backlit TVs I have seen.

We felt the color rendition in this TV looked good but over-saturated. It's not a bad look. Sometimes the slight over-saturation is favorable to viewers. If that happens to be the case, the 50L4300U is going to fit the bill just right. Overall we felt the picture quality was good.

The 50L4300 series does full HD content justice. By all means, it is no comparison to a 4K screen or an OLED 1080p display, but this one does a nice job. 1080p is hard to beat if the source material is seen on a display with good picture quality. If the L4300 is used for regular TV viewing and gaming , 1080p is going to be more than enough for a great picture. And when it comes to blu-ray viewing or using the TV as a computer monitor, 1080p is the preferred display over 720p. You'll be set either way with this one. 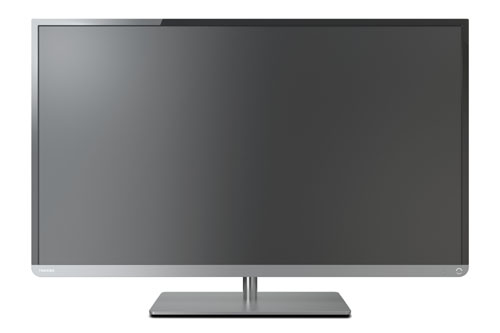 The appearance of the 50L4300U has received some changes compared to the L7300 above it. The hollowed out frame stand is replaced with the standard filled in square. It is a rounded square on this model that received the nice gun metal color Toshiba is running with this year. The sides and top of the TV have a glossy black bezel of about half an inch while the bottom has a slightly wider metal strip running the length of it. It is a little strange at first not to see a black bezel on all four sides of the screen. This simple design is nothing to shout about, but warrants a second look.

The 50L4300 is the last series in the Toshiba lineup to receive the Cloud TV smart TV platform. Cloud TV essentially makes the whole system run faster while making it much easier to connect devices and personalize the experience. Toshiba also plans to incorporate mobile devices from all walks of life. That means iOS, Android, and Windows 8 devices can all connect and communicate with the Cloud TV platform through a free app from Toshiba. It's a great feature that simplifies the entire process.

At $699 the Toshiba 50L4300U is a good offering for those concerned about a pretty good picture quality and plenty of HDMI inputs at a very good price. The appearance is not fantastic, sound quality can be lacking depending on the source (HD broadcast is much better), and the Cloud TV Apps only really offer a few premium offerings and is not much of an added value feature. By comparison the UN50F6300 which has a much better Smart TV function is $949. The Vizio entry level E-500d is around $669.