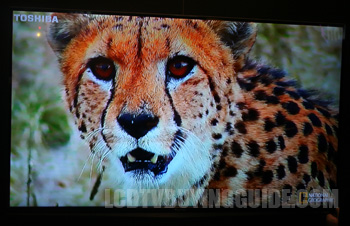 With Clearscan 240Hz processing, LED edge lighting and 3D compatibility with Toshiba's Smart TV suite, this is one of the top end Televisions that Toshiba will produce in 2012 and is second only the the incoming glasses-free 3D the company is set to ship in the 1st quarter of 2012. This model comes available in April or May of 2012 and will continue until March of 2013.

Toshiba's 240Hz refresh rate anti-judder feature on the 47L7200 is not as intrusive as many on the market. It also does not totally rid the Television of the jerky effects that it is attempting to reduce. But it's a good feature overall and we recommend that you leave it on. 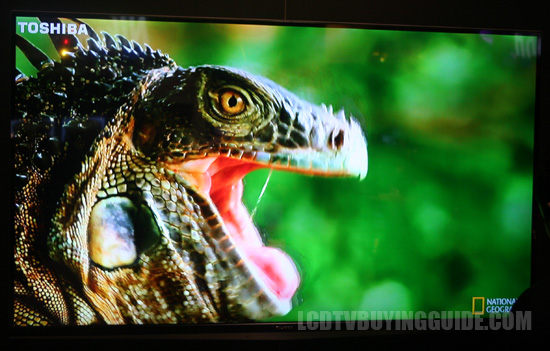 The 55L7200 includes built in Wifi and a web browser for easy access to the Internet. Navigation is better as well due to a full QWERTY keyboard remote control with a typing pad. The eportal web browser is new for 2012 and allows Tablet and Smart Phone control apps to control the L7200.

The L7200 has all the Internet Apps that Toshiba has to offer. Key premium Smart TV options include:

The top end Toshiba 3D 47L7200U for this year get a new sound upgrade with 2-way ported speakers. The new system is made by audio specialist company Audessey and is composed of their premium sound enhancement system for TVs. The company states of Television audio function. It includes volume extension and day/night modes on this model. Here is what the Audessey company says about their capabilities:

"Television audio is a tricky proposition: with flat, edgeless screens and no visible speakers or speaker grilles, how do you get decent audio? That's just the type of audio puzzle Audyssey engineers love to solve. Our digital technologies push the speakers to produce more volume and bass with richness and clarity. Plus our volume technologies preserve bass at low levels and control volume variances for a better movie and music experience."