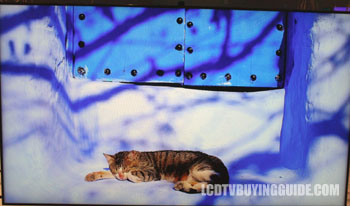 This giant UN75F6400 measures in at 75 inches and provides a great deal of value. Samsung has not tread ground this large for the mid tier level in the past. It's a nice acknowledgment to those who are looking for the ultimate home theater experience without dropping a very large bundle of cash in the process. The F6400 is a small step up from the F6300, but some heavy hitting features are added. Those upgrades come in the form of 3D playback and micro dimming. This is the perfect set for a value shopper looking for a good quality TV.