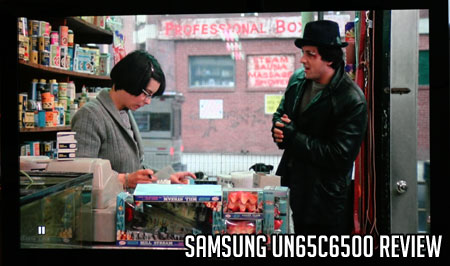 A crisp shot from the Blu Ray of Rocky 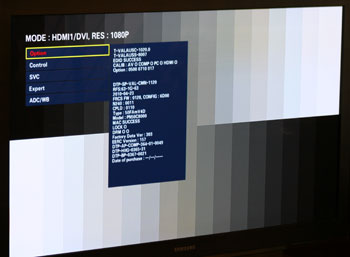 There is nothing subdued about this LED TV, from its super thin good looks to its super saturated colors. Blacks are rich and deep and colors vibrant if not over powering at times. Some dark shadow detail is lost and and subtle color notes forgotten. But it's a colorful picture many will relish. Read our extended picture notes below.

With color information both light and dark appearing so deeply saturated, contrast effect is excellent. Blacks appear inky and sometimes lose dark shadow detail. White light sometimes is distractingly too bright. Contrast appears more intense on the screen than the average of 191:1 post calibration ANSI checkerboard pattern contrast that we measured – probably due to the effects of the LED backlighting and saturated colors.

The UN55C6500 did a good job eliminating motion lag and judder with the 240Hz feature turned on. However, turning the Automotion Plus feature off does introduce some side to side judder (jerkiness). Neverthless, we recommend this action for especially film based DVDs and movies on broadcast TV.

Processor testing proved very positive for the C6500 series. However, we noted false grain and mapping" in some older standard definition 480i DVD content.

Processor Testing: See extended Samsung UN65C6500 processor tests here. The TV tested very well when we ran it through a series of processor video board testing.

Inputs: Amazingly with this thin screen Samsung has managed to fit 4 HDMI slots, a PC slot, a LAN Cat 5 slot (for Internet connection), 2 USB ports, and a component video input.

Appearance: The 55C6500 comes with a 15 to 20 degree swivel quadrapod (our word) table top stand. The stand is heavy, sturdy and gives and expensive quality with its gloss chrome metallic finish. The new 4 legged stand is a gutsy move and I like it. There are accompanying screws to further secure the stand to the TV. The super thin 1.1" screen depth is accompanied by an improved 1" bezel frame surrounding the screen. This is an improvement of an inch over last years model.

The overlaid Menu system is very attractively laid out and thorough, but slow and cumbersome to navigate.

Audio Output: Sound volume levels seem weak from the 15W X 15W built in speakers. We can understand the challenges for speaker placement in a 1.2" deep TV. For a majority of programming changing the mode to movie, and utilizing the Clear Voice feature will help a lot to improve voice tone in DVD and broadcast material. SRS TruSurround is a useful feature for HD content but it doesnt help voice tone. Overall, audio delivery from the UN55C7000 was slightly better than last years model, which was not impressive.

Features: The Samsung UN55C6500 is loaded with extra features, some surprising, others more useful.

AutoMotionPlus 120Hz Refresh Rate: But that's the only format for which we recommend it. Media Play: Use this feature connected through USB to keep picture and video files. Clear Voice, SRS and Movie sound options are listed above under Audio Output. We mention the new 3-D ready feature under the PQ section above. Click here for an overview of all the new features on this TV.

The UN65C6500 offers a wide variety of Internet Apps

Internet Connectivity: Samsung has probably the best Internet Apps partner list available in TVs today. The 65C6500 series expands the list of potential Internet partners with Blockbuster, USA Today, Netflix, VUDU on Demand, Hulu, Amazon on Demand, as well as the previously proffered Yahoo news, Flikr, witter, Yahoo Finance, Yahoo Video (and tons more options both paid and free). These options are nice improvements from last years package and make it more viable.. Response time is still a little slow when clicking on the various options. This feature is wireless possible with an optional dongle accessory.

Media Play: Use this feature connected through USB to keep picture and video files.

Clear Voice, SRS and Movie sound options are listed above under Audio Output.

Price Considerations: At $4000 at local retailers, this is no inexpensive proposition, but a 65" screen is hard to come by. There is not much competition in this size range. Try the Panasonic TC-P65VT25 or Panasonic TC-P65S2 for alternatives.

Samsung's 6500 series LED TVs for 2010 feature a new contemporary design thanks to the LED edge lighting. In fact the depth of the unit looked to us to be around the same 1.2 inches in depth from the 2009 model. The big difference that we noticed at CES 2010 in aesthetics was the much smaller bezel/frame which was only about 1 inch on top and sides of the TV screen.

The 2010 C6500 series LEDs wil have the AutoMotion 120Hz refresh rate, our reviews of various Samsung 120Hz or 240Hz Auto Motion Plus models from 2009 showed this feature to be excellent for sports programming but removed the natural background blur for normal broadcast and DVD content - creating an annoying kitchy effect. We also now recommend turning the feature off or to the gaming option for electronic gaming. We'll be interested when reviewing to see if improvement was made with other programming.

Although we believe the benefits from new power reduction usage figures for these TVs are overstated and not very relavant (maybe $1 to $2 a month savings on a 46" LCD) - we'll mention them anyway. For the energy conscious Samsung's 2010 LED TV line up uses green design concepts to meet the more stringent Energy Star 4.0 requirements.

Samsung is expanding their Internet@TV service to add streaming content from Blockbuster, Netflix USA Today and VUDU video on demand as well as access to services such as Twitter, Picasa, AccuWeather, Pandora and more through the built-in ethernet connection or optional WiFi. We're ready to see these TVs open up WiFi capability as universal and not proprietary.