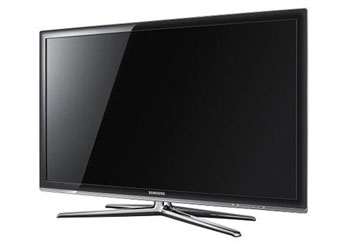 Samsung's 7000 series LED TVs for 2010 feature a new contemporary design thanks to the LED edge lighting. In fact the depth of the unit looked to us to be around the same 1.2 inches in depth from the 2009 model. The big difference that we noticed at CES 2010 in aesthetics was the much smaller bezel/frame which was only about 1 inch on top and sides of the TV screen. On the 7000 series LED TV line the Touch of Color is called "Mystic Earth". 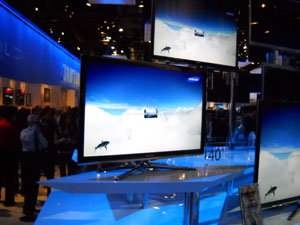 Samsung's proprietary 3D enabled system allows compatibility with multiple 3D formats to provide access to 3D content from many sources. As we note often, the TV will obviously perform regular two dimensional duties, but is enabled for 3D should you introduce some 3D content. We viewed DirecTV 3D enabled content on this series. We noticed some eye straining when the picture changed scenes or programming. We believe this was due more to the content than the TV.

Our reviews of various Samsung 240Hz Auto Motion Plus models from 2009 showed this feature to be excellent for sports programming but removed the natural background blur for normal broadcast and DVD content - creating an annoying kitchy effect. We also now recommend turning the feature off or to the gaming option for electronic gaming. We'll be interested when reviewing to see if improvement was made with other programming.

Although we believe the benefits from new power reduction usage figures for these TVs are overstated and not very relavant (maybe $1 to $2 a month savings on a 46" LCD) - we'll mention them anyway. For the energy conscious Samsung's 2010 LED TV line up uses green design concepts to meet the more stringent Energy Star 4.0 requirements.

Samsung is expanding their Internet@TV service to add streaming content from Blockbuster, Netflix USA Today and VUDU video on demand as well as access to services such as Twitter, Picasa, AccuWeather, Pandora and more through the built-in ethernet connection or optional WiFi. We're ready to see these TVs open up WiFi capability as universal and not proprietary.