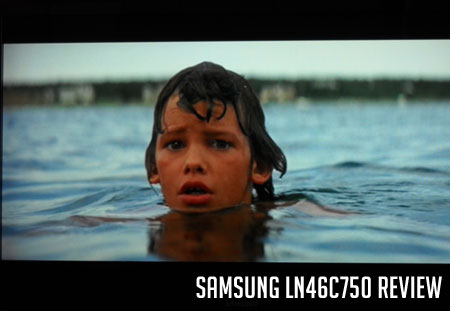 This is not HD. It's a beautifully unconverted shot from the a 480i DVD of Jaws.

The C750 series packs a strong punch with the new 3D TV compatibility feature combined with some of Samsung's best features from the past. Samsung isn't only producing LED backlit LCDs for 2010, the C750 line of CFL backlit LCDs contains many of the features of the more expensive LED TVs at a more affordable price. The C750 uses Samsung's 1080p, 240Hz "Ultra Clear" panel. While we found the motion blur reduction of the AutoMotion Plus 240Hz and 120Hz impressive during sports programming we didn't like the effect it had on picture depth in film programming. Other high hertz rate TVs didn't showcase this issue so we are hopeful that this has been remedied for 2010.

Calibration: The Samsung LN46C750 was extremely easy to calibrate picture settings. In fact, from the movie mode setting, there were only minor tweaks needed here and there to close in on D6500K. There is an ample array of calibration controls including white balance and noise reduction. The standard setting continues to have a major blue push. The Movie setting allows adjustment of all picture setting options and brings the picture to life. One should avoid the Dynamic picture mode setting on this TV.

Processor Testing: The internal processing chip sets for the C750 series LCDs are very good. One of the first things we noticed during testing was hose crisp and clean edges were without adding unwanted edge enhancement artifacts. The Sharpness control should be kept low between 10 and 20. Using it at a higher level with produce nasty edge glow artifacts.

3D TV Viewing: We were able to view this TV with DirecTV 3D content at CES 2010 in a special viewing area using the provided 3D glasses. We noticed a strong eye strain when the scenes changed from frame to frame. The DirecTV content was not smooth or enjoyable to watch. As we have pointed out in many articles, the viewer will not see 1080p HD through both eyes in LCD TVs due to limitations in Hz the rate. I do not think this had anything to do with the eye strain we encountered. We believe that resulted from the rough up programming shown in a hurry at CES. 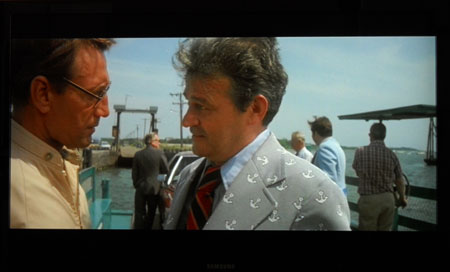 This shot from Jaws shows just how good the TVs upconversion from 480i DVD is. Notice the crisp details in the jacket (anchors).

Up conversion from 480i and 480p: In the past we have harped on the importance of the AutoMotion Plus 240Hz or 120Hz technology contained in this and most all of Samsung's LCD and LED TV offerings. The importance of the performance of this feature past and present cannot be overstated. In the 2009 series B750 series we recommended turning off the 240Hz feature for all but sports programming due to the unpleasant side effects produced when the feature eliminates the natural background blur of the picture. We believe the feature is much better this year albeit still intrusive for some viewing. Our recommendation is to follow a Custom setting for this feature of Motion Blur 10 and Judder Reduction 2 when viewing 480i DVD and normal non-HD broadcast content. This will eliminate a lot of motion blur while not introducing an artificial looking picture which reminds you of a soap opera. See our instruction below under the Features section about how to get to this feature setting. 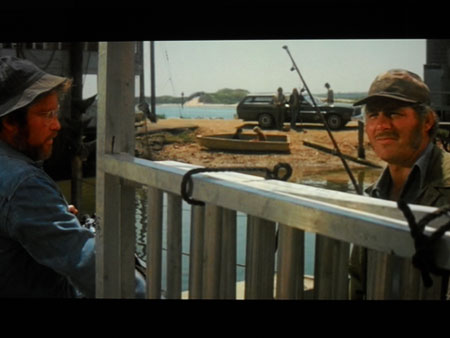 Another good detail shot from Jaws.

With this modification, I enjoyed the picture presentation on the C750 very much even with 480i or broadcast content. The Ultra Clear screen panel produces a magnifying effect brings scenes to life. Images are crisp, black levels remain very rich, and color is impressive. There is very good light flow through the picture which allows for lots of detail even in dark scenes. Surprisingly, side viewing are solid even with 480i content without degradation of blacks and contrast.

720p/1080i/1080p Picture Quality: Black levels and contrast are very pronounced on this TV. Images are crisp and the detail is amazing with HD sources. The big decision is whether or not to engage the 240Hz Automotion feature or leave it off. It does introduce some unrealistic effects. My recommendation is to either leave it off entirely (except for sports programming) and get used to some judder and motion blur, or use the custom setting mentioned above. 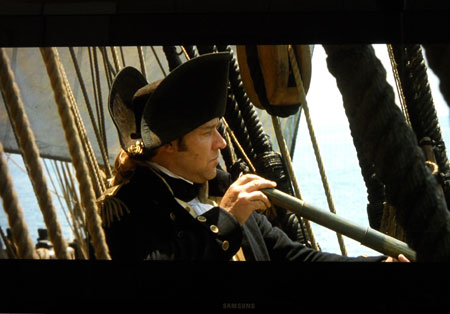 Contrast, color, and dark shadow detail; this shot from the HD Blu Ray version of Master and Commander.

After tuning the 240Hz feature, high definition content appears vibrant, realistic and extremely crisp. Blacks are rich for an LCD and contrast is a strength. One of the strength features of the LN46C750 is the unusual amount of displayed depth for an LCD TV. The aforementioned Ultra Clear panel has most to do with this. Colors are very rich but not oversaturated.

Black Level/Contrast/Contrast Ratio: Black Levels on the C750 series LCD 3D TV is super saturated, as black as the glossy black bezel surrounding the screen. We believe contrast is also enhanced by the Ultra Clear Panel that Samsung uses for this LCD TV. Contrast is very impressive on this TV even compared to plasma TVs. 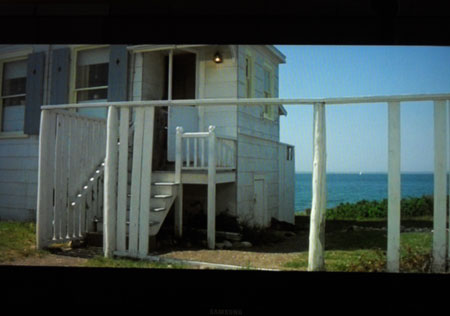 Roy's House in 480i DVD of Jaws. Great color and contrast.

False Contouring/ Mapping: We noted slight mapping effects in some dark content, but it was not a significant down point.

Features: Read above in the Picture section for a run down on how the 240Hz AutoMotion Plus feature performs. Here's how to turn it off and on:

Next up the C750 LCD series has an Internet widget feature with Yahoo!, Flicker, You Tube, and others. It's one of those features that you will scroll through and glance at once and never use again. The options are currently unappealing, but it's nice to have the LAN connection for future proofing. The C750 series is DLNA compliant which allows various devices in the DLNA network to communicate with one another.

Internet Options: There is an array of Internet options, some proprietary. Samsung has increased the options. The Youtube option was pretty good. We found the Yahoo! Widgets in finance and weather weak and non-worthy. Some other options are Panadora, Vudu, Blockbuster, Netflix, USA today AP new ticker. The Netflix or Blockbuster options should be very useful.

Aesthetic Considerations: The 46C750 LCD has attractive looks and includes the new chrome quadrapod silver metal stand. The TV can swivel on the stand about 20 degrees. The depth is a wall montable 3.2". The framing bezel is a nice width about 2". It's black with a plexiglass overlay that goes just past the edges to give the appearance of glass. I like the effect of this 2010 plexiglass overlay addition. There is not Touch of Color in this TV. Under the center bottom frame there is a unique wide V shape and subtle silver gray and red Touch of Color.

Remote Control/Menu Funtionality: The C750 series LCD has a nice easy to navigate menu system with transparent headings. The simple arrow keys are easy to operate. One big drawback is the considerable number of steps to get to the Automotion Plus feature which could be used extensively. A dedicated button for this feature would disburden this annoyance. The remote is straightforward with almost all keys being backlit if necessary. Another improvement on is the matte black finish rather than the sticky gloss finish which showed fingerprints. There is a dedicated Yahoo! Widget button added. The source button controls input selection. The p. size button controls aspect ratio.

Audio Output: There is plenty of volume capacity on this TV from the powerful dual 10 watt speakers. The C750 is plenty loud in large room at just 30% of total. We were not as impressed with the quality of the volume as voice seemed weaker than background noise and there was a hollow, tinny effect in many instances. We were impressed with volume of music and background sound. But overall the audio presentation is not full and rich.

The LN46C750 has a lot to offer: A great picture with a time tested technology (CFL LCD), excellent black levels and side angle viewing, combined with the updated swivel stand, plenty of volume and some impressive Internet options. At $1529 you are paying a little upcharge to future proof for 3D compatibility and 240Hz, but at least not LED backlighting. This will be about the most competitive 3D compatible offering in the marketplace as well as the only 3D compatible CFL LCD TV. Competition comes from LG's 46LD550 and Sony's KDL-46EX500 though neither of these are 3D ready.