Color presentation is somewhat washed out and blacks are not as super strong, however the picture presentation during fast action scenes is smooth and stable, which is a big plus in this price range. Many of the lower quality 2nd and 3rd tier TVs that will compete with this TV in price have some terrible motion artifacts and jittery picture. At times there could be more light throughput at times to enrich colors. We noted some jerky motion artifacts in the background of some scenes. However, I did not see much offensive negatives in the foreground and was very pleased with the detail offered in 480i standard definition content in general. I certainly would not describe the picture as poor but it's not going to overwhelm you either.

Colors certainly have more pop with an HD signal than with standard def. Depth is somewhat lacking from the anti-glare LCD panel which is not of the clear coat variety. Another negative that would not have been so noticeable a couple of years ago is that the overall presentation is fairly flat, without a lot of depth.

Note: Best Picture feature: Clear Motion Rate from Samsung. Even though it is rated a 60Hz panel, the CMR technology provides a nice smooth flow of on-screen images even during fast action. Worst Picture Feature: Side angle viewing – blacks and contrast degrade starting at around 25 degrees.

Features-wise there is not a whole lot to discuss. The E550 is not a feature laden model. It does not have Internet function or 3D capability. It has SRS trusurround to give the audio funtion a little more zip from the 10w speakers. The CMR picture smoothing mentioned above is really its best feature. 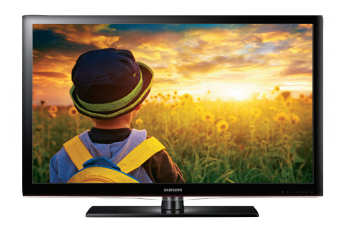 It's shiny, bold black gloss frame is so OK, that's it's boring even to mention it in today's market. The frame is about 2” in width. The total depth of the unit is a little over 3”. In today's world the looks of the E550 is very mediocre.

The input selection of the E550 gives an ample 3 HDMI inputs, a composite, component, USB (which allows video viewing). The component and composite inputs cannot be shared – only one at the time.

The remote control is large, basic, is not backlit, but contains sufficient controls.

There are two inbuilt 10 watt speakers. At 50% of volume the D450 produced enough output from a 10 foot distance. The sound output is of average quality. One option that helps somewhat is the SRS TruSurround option in the Sound Menu. Samsung's Clear Voice feature is not offered on this TV.

Currently the LN40E550 costs around $549 from authorized Internet dealers. It has a lacking feature set overall and the picture is average too, although it is better than most all the off-brand discount competition due to its CNR technology and a stable picture. In the smaller sizes, it might be a decent second or third room TV, but with solid performance over time. Longevity should also be a strong point. It should last for many years as there are not too many moving parts.

Calibrating to near D6500 was fairly easy although you wont be able to dial it in perfectly with only a 2 point while balance scale and no Hue, Saturation, and Brightness Color Gamut settings.. With smaller TVs we are not quite as concerned with pinpoint accuracy to D65. However, the below picture settings are “in the range,” so use them if you like. There are more white balance controls and advanced settings than I anticipated based on size and price, such as Black Tone, Dynamic Contrast, a Gamma setting.