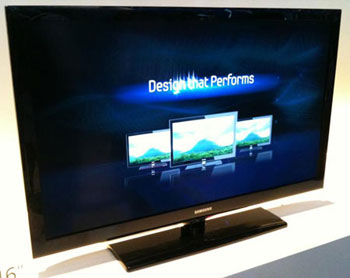 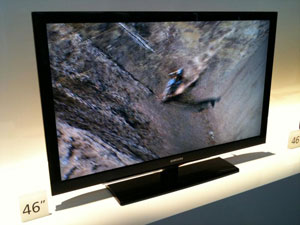 Samsung announced anothr CFL backlit line of LCD televisions at CES 2010, the C650 series of LCDs feature Samsung's 1080p, 120Hz "Ultra Clear" panel. In the 2009 B650 series we were impressed with a number of features but didn't care for the effect the AutoMotion Plus 120Hz processing had on film, DVD and broadcast content other than sports programming. See our review of the 2009 650 series. We are looking forward to doing a full review of the 2010 version and seeing if our problems with this feature have been cleared up.

The popular red Touch of Color bezel returns for 2010 on the C650 line and while the C650 doesn't share the sleek, metallic designs of the LED line up it's still a good looking television. 4 HDMI inputs, 2 USB ports and built in ethernet for access to Samsung's Internet@TV are some of the other notable features of the C650 series.

Samsung is expanding their Internet@TV service to add streaming content from Blockbuster, Netflix USA Today and VUDU video on demand as well as access to services such as Twitter, Picasa, AccuWeather, Pandora and more through the built-in ethernet connection.