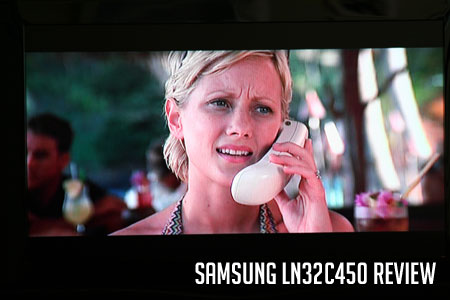 Samsung's 2010 4 Series LCDs are a step up from the 3 series. Available in the same sizes they still feature a 60Hz, 720p, CFL backlit panel, with SRS TruSurround HD. They add a third HDMI input, the ability to watch video off a USB thumb drive and Samsung's AnyNet+ which allows communication between similarly equipped Samsung home theater equipment. The 4 Series LCD make for an excellent TV for the bedroom, a child's room or other rooms where you need a smaller, less expensive HDTV.

Calibrating to near D65 was fairly easy. With smaller TVs we are not quite as concerned with pinpoint accuracy to D65. However, the below picture settings will get you close. There are more white balance controls and advanced settings than I anticipated based on size and price, such as Black Tone, Dynamic Contrast, a Gamma setting, and a nifty Flesh Tone setting that will take the onscreen flesh tones from a yellowish to a pinkish appearance at your whim without changing the overall color appearance of the picture much.

Testing for Motion Artifacts: Samsung did not cut corners on the processing video boards contained in the LN32C450. We were fairly impressed with testing results. 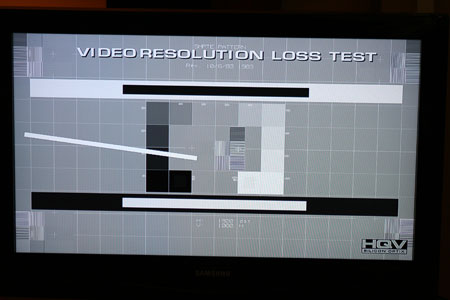 The LN32C450 did a good job with various processor tests results. There was little motion artifacts during the Video Resolution Loss Test. 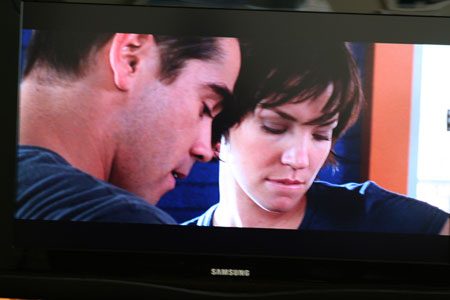 This scene from the Blu Ray HD version of S.W.A.T. Shows a bright background and good contrast in the foreground without losing detail. 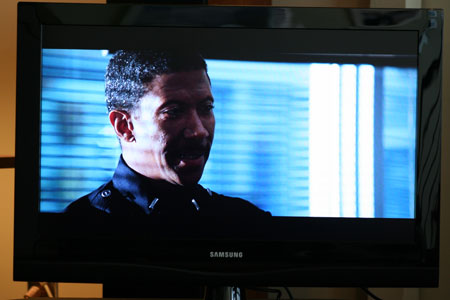 This scene from HD scene from S.W.A.T shows no dithering artifacts in the background blinds and good shadow effects.

Off center viewing was average on this LCD TV with the contrast and black levels fading at around 35 degrees off angle – again not bad for this price range.

On a negative note, there was notable loss of contrast and black levels at a 35 degree angle. This is not uncommon for LCD TVs. It's a problem that LCD TV manufacturers have attempted to somewhat alleviate with the introduction of LED backlighting. The idea has been marginally successful.

The input selection of the LN32C450 gives an ample 3 HDMI inputs, a composite, component, USB (which allows video viewing). The component and composite inputs cannot be shared – only one at the time.

As far as aesthetic considerations go, the LN32C450 has pleasant design with a slight touch of color at the bottom of the framing bezel. There is also a slight sloped element to the bottom of the frame that accentuates the touch of color. The design is better than the other 32" LCD TVs on the market except the LG's. You almost cant believe how light the TV is upon lifting it, a scant 15.7 pounds. The TV is 3.25" in depth and 8" with the stand. The included table stand is very light and inexpensive and the TV must be turned on its head and the table stand screwed on upside down to accomplish the assembly (at least that's the way we found easiest). The table top stand does not swivel side to side.

The remote control basic, is not backlit, but contains sufficient controls – especially for this size of TV. There is a nifty "tools" key that allows from quick selection of frequently used controls. The onscreen menu is very complete with thermal scrolling design and is easy to use – perhaps more so than Samsung's high end TV offerings. The menu appears as an overlay to the material being viewed which is always nice.

Aspect ratio options include Zoom 1, 16:9, 4:3. The algorithmic sizing remedies in the TVs processing do a nice job.

Audio Output: There are two inbuilt 5 watt speakers, which are deficient in our opinion. From only 10 feet the user will need to keep the volume control at 75% of total capacity. The sound output quality is also poor with a tinny, hollow character – but that's about all one can expect from 5 watt speakers.

Currently the LN32C450 costs around $489 from authorized Internet dealers. It offers a very nice feature set and quality in this small size and price range – which is often lacking in quality options. Competition is from the Sony KDL-32EX500, and the LG 32LD520 as well as a couple second tier brands such as Vizio.