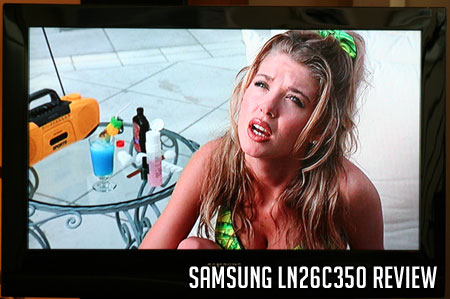 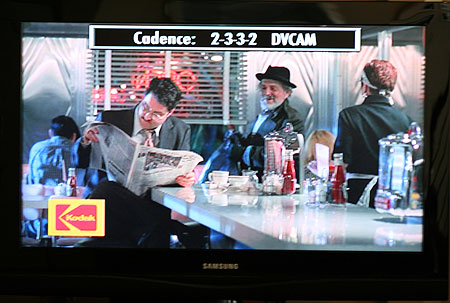 The LN26C250 did a good job with various processor tests results

Picture Quality Performance: With such a small screen it's difficult to note any motion artifacts in the background unless looking very closely. But it's there to a small degree if you want to get out the magnifying glass. The processors did a very nice job. Color rendition was not oversaturated, if not sometimes a little muted. 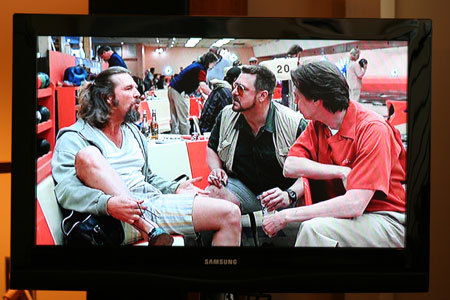 A shot of the guys in The Big Lebowski looks a little washed out, but it's just the unusually bright lighting of the bowling alley

Off center viewing was average on this LCD TV with the contrast and black levels fading at around 35 degrees off angle – again not bad for this price range.

Inputs: The input selection of the LN26C350 just barely gets the job done with 2 HDMI inputs and one component input which shares space with the composite input. The component and composite inputs cannot be shared – only one at the time. There is a USB port available; useful for downloading photo and/or music files.

As far as aesthetic considerations go, the LN26C350 has straightforward design and better than the other 32" models on the market except the LG's. You almost cant believe how light the TV is upon lifting it, a scant 12.7 pounds. The TV is 3.25" in depth and 8" with the stand. The included table stand is very light and inexpensive and the TV must be turned on its head and the table stand screwed on upside down to accomplish the assembly. It would be more convenient if Samsung would just include the stand already assembled on the TV, same as some other manufacturers. The table top stand does not swivel side to side. The 2" bezel framing of the TV is gloss black and non-spectacular but does contain a sloped design element at the bottom.

Remote Control/Menu Funtionality: The remote control is fairly basic, is not backlit, but contains sufficient controls. There is a nifty "tools" key that allows from quick selection of frequently used controls. The onscreen menu is very complete with the normal scrolling design and is easy to use – perhaps moreso than Samsung's high end TV offerings. The menu comes on as an overlay to the material being viewed which is always nice.

Aspect ratio adjustment is controlled by the small P.size button at the bottom of the remote to allow sizing of your picture between the given options such as Zoom1, 16:9 and 4:3 standard.

Audio Output: The two inbuilt 5 watt speakers barely get the job done. From 10 feet the user will need to keep the volume control at 75% of total capacity. The volume quality also is lacking with a tinny character and no base – but that's about all you can expect from 5 watt speakers.

Currently the LN26C350 is for sale at around $399 at most stores. This TV is all about price paid/value. $399 seems like a lot for something that weighs in at 12.7 pounds, but the model is still very competitive with other models and is Samsung's lowest end offered. The TV offers a very nice feature set and quality in this small size and price range – which often lacks in quality options. Competition is from the Toshiba 26C100, the Vizio VL260M,and the Panasonic TC-L26X1 as well as a couple second tier brands.